Wakelook Detector for Android tells you which apps drain the most battery using the feature - gHacks Tech News
ghacks.net

Android apps can make use of a power management feature called Wakelock to use the cpu, prevent the app from being terminated by the system, or turn the screen on even if the phone has been locked by the user. The idea here is to tell Android that the device or the app needs to stay on to perform an operation. While that is often a good thing, think retrieving information from the Internet, it may also have an ill-effect as apps can make excessive use of the feature which in turn drains the battery of the Android device at a rapid rate.

Wakelock Detector is a free app for Android that keeps track of all other apps that make use of the Wakelock feature.

The following procedure is recommended by its developer. 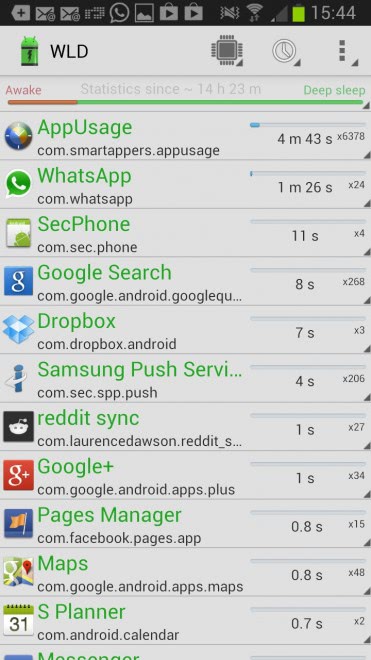 You can add system apps to the mix with a click on the options icon at the top right, the selection of settings from the context menu, and enabling advanced mode on the page that opens up.

You can switch to the display of screen wakelocks using the top left button. This highlights apps that keep the screen turned on even after it should go to sleep, and apps that turn on the screen while the phone or device is in sleep mode. It is ideal for finding out which apps break the sleep mode of the Android device and drain battery because of it.

The application offers a couple of additional features that you may find interesting. You can only display running apps, indicated in green, or all apps instead, and also sort the tables in different ways if you like.

I'd recommend you go through all lists the program makes available to you, look at apps listed there that seem to use the feature excessively and decide whether you want to continue using the application or not.

I for one decided to uninstall the AppUsage application as it was not really worth it after all. While it provided me with interesting information, it is not really something that I had to run permanently on the system.

Previous Post: « Use Google Now wallpapers on your Android device (and have them changed automatically)
Next Post: 7min Full Workout: High Intensity Training app for Android »