So what is Twitter #music and why do I see a black screen on the site? - gHacks Tech News
ghacks.net

So what is Twitter #music and why do I see a black screen on the site?

Twitter launched #music yesterday, a new music discovery service that combines what Twitter users like music-wise with options to listen to that music right on the site. The service looks at general likes and dislikes of all Twitter users that express their opinion towards music, but can also narrow down the music so that it is more closely related to people you follow on Twitter.

The service launched as an application for Apple's iOS operating system and as a web-based version, with an Android app likely to be released in the near future. If you visit the #music page on Twitter you may notice that it remains black except for the main menu at the top and the footer area. Selecting different options, e.g. emerging instead of popular does not change that situation at all and you are probably wondering what is going on.

I can assure you that it is likely not a browser issue or an issue related to your account. The reason for the black screen is that Twitter limits the service to the following countries: US, Canada, UK, Ireland, Australia and New Zealand. If you are living in another country, or if Twitter believes you do by identifying your country incorrectly, you will see the black screen and nothing more. 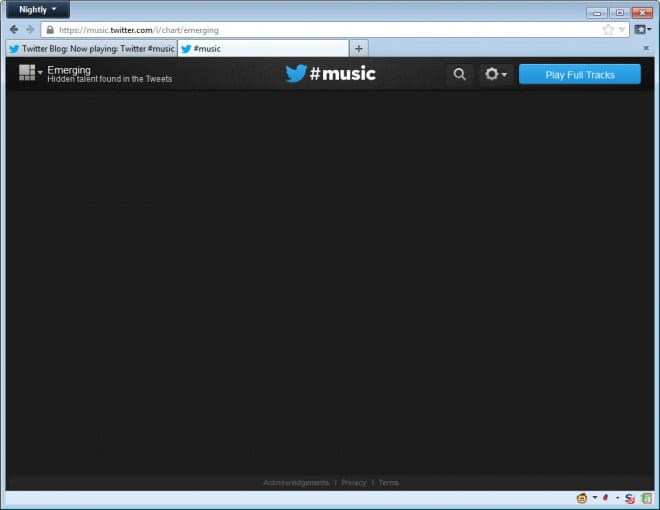 Twitter music by default uses iTunes and the service's preview feature which means that you can play 30 second samples of songs listed by the service. Spotify or Rdio users can sign in to their existing accounts to link Twitter music to their music services so that they can listen to full songs instead. This is done with a click on play full tracks, the selection of the service you are a member of, and the signing in to the service if you have not done so already.

Twitter #music is an interesting service as it uses Twitter's vast user base for music discovery and trends. While you probably won't find any surprises in the popular category, you may find them in the emerging or personalized listings of music instead.