You have a couple of options to improve how you interact with Windows 8's start screen and the apps that run on it. You can naturally use the way Microsoft envisioned users to make use of it, by displaying it in full screen on the system and either clicking or using the keyboard to find and launch applications.

At least some users of the Windows 8 operating system dislike the two interfaces and the switching between them as it feels disruptive to do so.

Update: ImmersiveTaille is no longer available. The project website has been taken down. A comparable option is not available anymore, likely because Microsoft switched from its Start Page design to a traditional desktop interface with the release of Windows 10.

We have uploaded the last release version of ImmersiveTaile to our own download server. Please note that we don't support the program in any way and that we have done so for archiving purposes only. The program may not be compatible with recent versions of Windows. Click here to download it to your system: ImmersiveTailleÂ  End

There are options to change this behavior, for instance by installing one of the many start menu applications for the operating system, by installing the excellent Modern Mix which enables you to run apps on the desktop, or by using programs such as ImmersiveTaille that bring the start screen to the desktop.

The basic idea of the application is the following. Instead of taking you to the start screen when you press the Windows-key, it displays the start screen on the desktop. You can configure the start screen to appear at the top, bottom, right or left of the screen in an overlay, or in full screen but with the taskbar still in view.

The advanced options provide you with the means to set a specific width, height and starting position on the screen which is great if you want to customize the location of the start screen further. Here you can also set the time the screen stays open before it closes automatically. While we are at it, the screen closes automatically when you click anywhere else on the desktop. A click on the taskbar hides it for instance again, which means it cannot be displayed permanently on the desktop.

ImmersiveTaille is an interesting program for Windows 8. I'd find it more useful if it had an option to display the start screen permanently on the screen with a toggle to display and hide it. It is not really that different from start menu applications currently which also make available all installed apps and a search right in their interface. 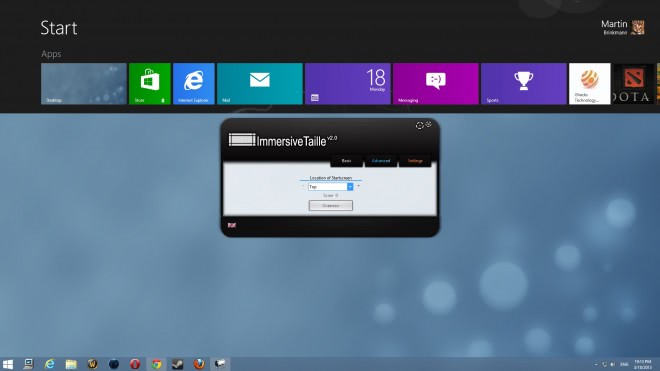