Steampunk Tower is a special kind of tower defense game. You are tasked with the protection of a tower that is under constant attack by enemy forces. You have four different types of cannons at your disposal to defend the left and right side of your tower. There is the quick firing machine gun cannon for instance, the slow firing but heavy hitting heavygun cannon, or the mighty Tesla cannon that fires lightning at enemies.

You start with a specific amount of money at the beginning of each level which you need to invest in cannons. It is usually not enough to feel safe though but you will earn money throughout each level that you can invest in new cannons or upgrades for existing ones.

One interesting game mechanic is the ability to move cannons to a location where they are needed. This way you can move cannons to the side where a major attack is taking place to protect your tower from damage.

There is another thing that you need to take care of, ammunition. Each cannon will eventually run out of ammo and when that happens, will fire slowly as ammo gets restocked. You can at any time move the cannon into the center of the tower to restock its supplies right then to avoid that from happening.

The game starts of slowly with a couple of foot soldiers that attack your tower. It quickly becomes difficult though when planes, tanks or zeppelins attack the tower from air and ground at the same time. Different types of enemies require different types of weaponry. A heavygun is for instance excellent against armored vehicles and groups of soldiers lumped together, while it won't to anything against planes and is highly ineffective against single soldier targets. 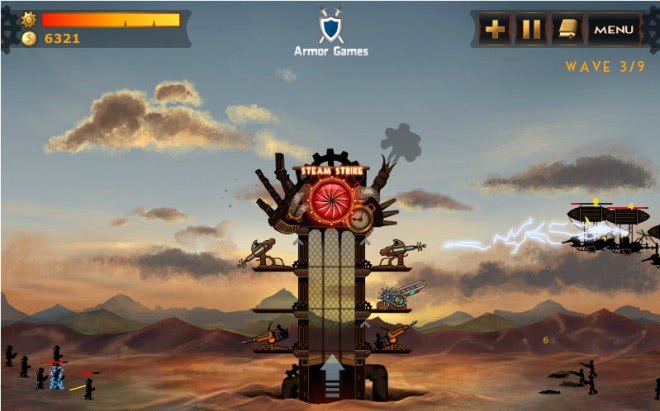 Upgrades become available when cannons reach a new experience level. They cost more than a brand new cannon but improve a cannon's effectiveness in combat. It may fire faster or more powerful bullets when upgraded, or may increase its range to attack enemies at longer range.

In addition to that, you also get access to steam strike, your tower's ultimate weapon that charges slowly but when it becomes available, is devastating to all enemies you point it at. It is great for situations where you need a bit of extra fire power, but since it charges slowly, it is important to use it in the right situation.

You receive a star rating after each battle, and depending on how well you fought in it, receive stars that you can spend on global upgrades. These may award you with more money, make specific cannons more powerful, or give you other advantages like additional shells before your cannons run out of ammo. 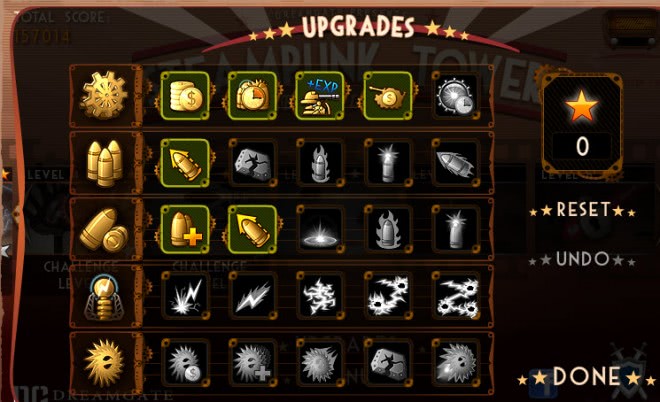 Since you do not have enough starts in the beginning to upgrade everything, and believe me you want all the upgrades, you need to make a decision on what to upgrade first. If you are particularly fond of a specific gun, you may want to upgrade it first before you upgrade the other guns or the general category. Then again, faster reload speed and more money sounds almost too good to pass on in the beginning.

The levels get a lot harder at around level 5, and that is only one third into the game. You need good ammo management here and make the right buying, upgrading and positioning decisions to beat later levels in an acceptable fashion. While it is usually no problem to survive somehow, you may want to get all the stars in each level as that correlates directly to the number of upgrade stars you receive.

Steampunk Tower is a fun game, for a while. The game mechanic is interesting enough to keep you entertained, especially since lots of enemy types are introduced in the levels. You will however notice that there is not really a lot that you do actively in the game. Sure, you buy and place cannons, and fire the mega weapon as well, but that is about it. Most of the time, you just observe how your cannons fight the enemy.