When you are thinking about pioneers in games, you are probably getting warm and fuzzy when Colonization comes to your mind. Pioneers is not like that even though it makes a couple of references to the game.

It is smaller scale than Colonization, concentrating on a single party of pioneers instead of a colonial empire that you build. What's interesting about Pioneers is that it also uses a couple of chapters from the game Pirates, another classic Sid Meier game.

You start on a ship in Pioneers and create your first character while you are on it.

Characters have a profession, think scout, craftsman or soldier, attributes like strength and stamina, and a set of skills like climbing, cartography or ranged weapon expertise. Your ship sinks shortly thereafter and you are stranded in an unknown land. 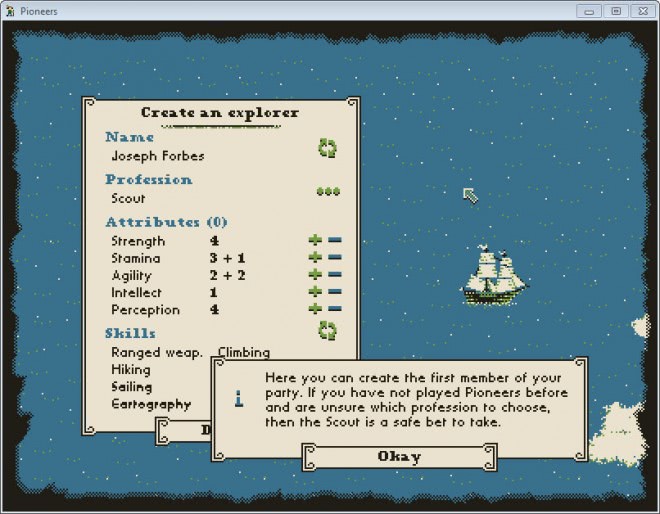 Here you can play through the tutorial, which you should if it is your first game, or skip it which you can do if you want to figure out the game by yourself or have played through it before. 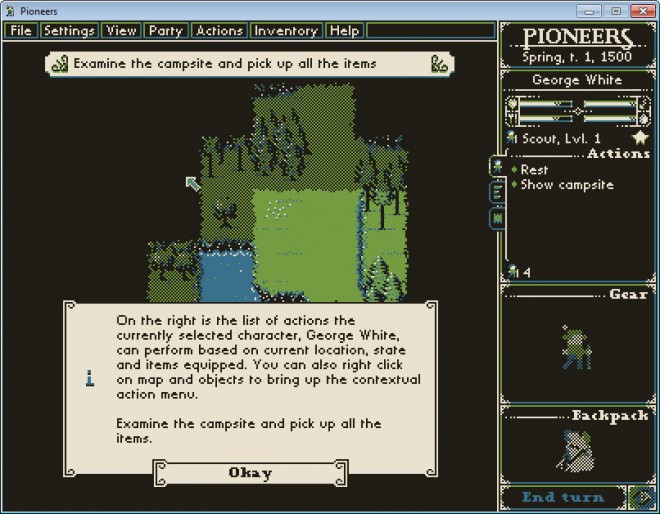 The game is a turn based game which means that you have a fixed number of actions that you can perform per turn before you need to click on the end turn button. You can move your character around on the map, chop down a forest, collect berries in nearby bushes, rest, or do other activities that allow you to survive.

What you need to understand as well is that your character gets fatigued, and that you also need to eat and drink to stay alive. The status is indicated underneath the character's name on the screen so that you always know what is going on and when it is best to eat, drink or rest.

You select actions from the actions menu on the right. They depend on where you are on the map and what you have in hand. Item use is a bit fiddly at first. You need to select an item that you carry with you and then the button next to gear which displays a context menu with actions. If you select the axe for instance, you can go ahead and start using it on trees. For some activities, you do not need equipment. You can for instance collect berries from nearby bushes - press CTRL to see the resources on the map - by right-clicking on the bush and selecting the appropriate action.

Eventually, you will reach a town after the tutorial which acts as your base of operations. 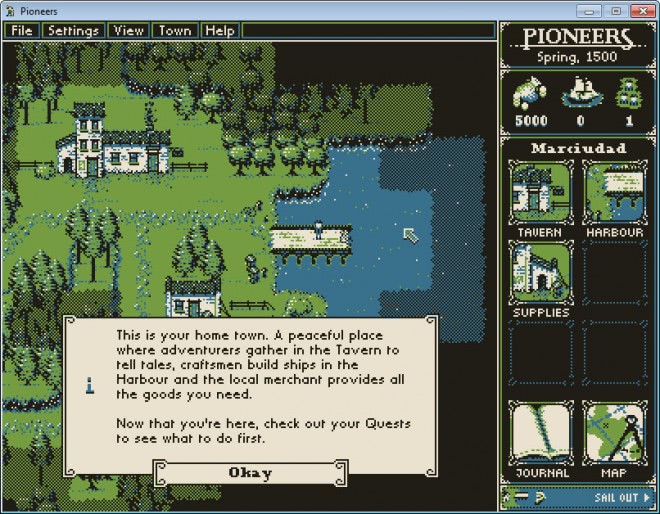 Once you are in town, the real adventure begins. Your first task is to build a ship, hire a crew, and buy some equipment that you need on your journeys. The game walks you through those first steps in the journal so that you can't miss important pieces of equipment for instance.

You get quests and objectives that you can accept. The very first quest that I accepted was to collect spices from a nearby island for instance, and the reward was 1000 gold which was a fifth of the starting amount I began the game with.

On your journeys you will encounter native tribes and animals. The game uses a system of glyphs for communication, since you are not speaking the same language as the tribes. It is up to you to decipher the meaning, but to make life a tad easier, animals and tribes use the same system. So, if an animal attacks you it will display a specific glyph and if you see that very same glyph when you are encountering a tribe, you know what is going to happen.

There is a lot that you can do. You can explore the world to get access to regions farther away from your home base. To do so, you need to hire crew members, raise enough money for supplies and weapons, and maybe even build a larger ship before you set out sails to do so.

Pioneers is a game in progress and while many bugs have been ironed out already, you will notice that a couple of things are still missing from the game. The developer will add those game elements in a later version of the game so all is good in this regard.

The game itself is fun to play, even though it makes it quite hard for players at times. You now only need to keep an eye on your food, water and energy levels, but also click on the end turn button manually whenever you have no moves left in a turn. That's especially bothersome when you are moving around on the map as you will hit that button quite often in that time.

All in all though it is a great game with lots of potential. Some users may not like the distinct graphics style but it took me back right to Pirates, Civilization and Colonization on the Amiga.