Many gamers like to play games as early as possible. For many, it does not really matter if the game is not finished yet, beta or even alpha access to a game they like to play is all that is needed to make them happy for a while. It should not surprise you that there is a market for alpha and beta keys and the like, and many sellers earn good money by selling early access codes to games.

If you look at the games that are currently trying to get funding on Kickstarter, you will for instance notice that one incentive to fund those games is alpha or beta access to the game. This often costs you a couple of bucks more but seems to work out really well for the development company involved.

If you have opened Steam recently, Valve Software's game distribution platform, you may have noticed a new header in store. It reads "Early Access Games. Discover, play and get involved with games as they evolve".

When you click on the link you are taken to a special store page where early access games are listed exclusively. The term refers to games that are still in development but available as alpha or beta versions. So, you buy the game early to get access to its latest version right away.

The selection is limited right now, with twelve games listed here at the moment. Most gamers probably only heard about one or two of them, with Arma 3 probably being the most popular of them right now. Most of the games on the page are so called independent games though. 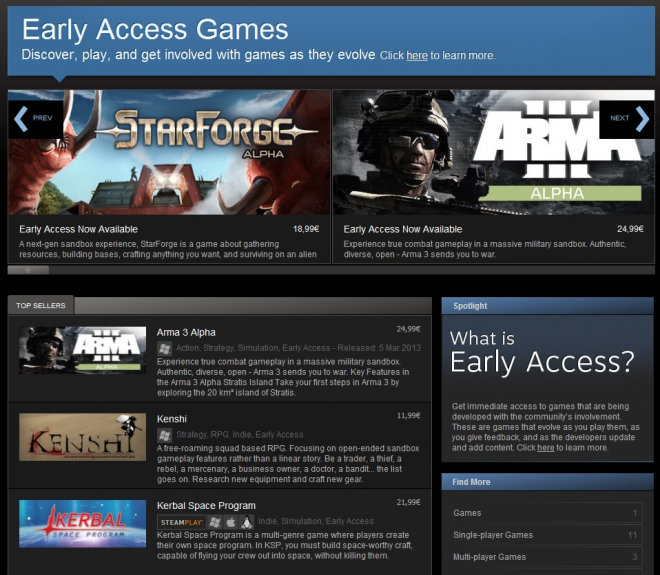 When you open a games' store page you will receive information about the game's status by the developer and an option to open the discussion board for the game to report bugs and leave feedback.

When you purchase any of the games, you are granted access to those games immediately. You still need to download and install them first, but you get to play them before other users who are waiting for the final release.

The idea makes sense for Valve, as many gamers like early access to games that they are interested in.  Developers and publishers benefit from this as well, as they start to earn from the game before it is officially released. While they could also accept preorders for the final game, letting users in early offers advantages that preordering does not. It is for instance possible to stress test a multiplayer game this way, or get valuable feedback from early adopters and users interested in the genre or concept to make changes to the game before it gets released to a larger audience.

While users get early access to games they are dying to play, it is important to note that games may contain bugs or other issues that a final game may not include.

Martin Brinkmann is a journalist from Germany who founded Ghacks Technology News Back in 2005. He is passionate about all things tech and knows the Internet and computers like the back of his hand. You can follow Martin on Facebook or Twitter
View all posts by Martin Brinkmann →
Previous Post: « Pioneers, a game of exploration [Game Saturday]
Next Post: Trigonometry Wars 3 Redux: Bullet Hell deluxe [Game Saturday] »