If you are following the Game Saturday series regularly you know that I love to play shoot em up games. I do not really know where this obsession comes from, maybe from the very first game that I played on my Atari 2600 back when it was the craze: River Raid.

Anyway, the shoot em up genre can be divided into several niches and one of them is the bullet hell niche. Games that fall into that category have usually one thing in common: they throw that many bullets at you that you may spend more time dodging those bullets than shooting targets on the screen.

If you are a master of the genre you probably can subconsciously dodge those bullets but as far as mere mortals are concerned, they will have their hands full maneuvering their vessel around those bullets.

Trigonmoetry Wars 3 Redux is a free game for the Windows operating system that gives you no room to breeze while you are playing it. It looks like many other shooters at first. You have three ships that you can select your own from. Each ship comes with a unique attack pattern and different movement speed. The first one is very agile for instance but its bullets shot straight ahead while the third ship is slower in its movements but can direct the bullets based on the direction it is heading.

Once you have made your ship selection you are taken to the first level of the game. You hit Z to fire your ship's weapons and while it may seem logical to auto fire, you may find yourself using the second weapon of your ship more often because of its power. It is possible to switch to a laser attack which is more devastating but only shoots straight ahead and will slow you down, great for bosses and other targets that are harder to destroy. The C key finally drops a bomb on the screen that will remove all bullets flying your way and hurt all enemies on the screen at the same time. 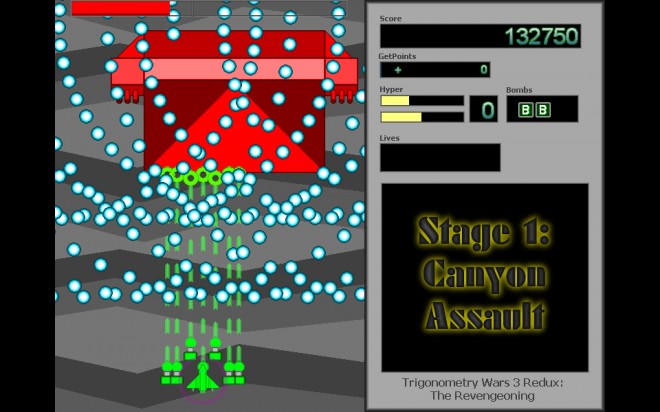 You slowly build up something that is called Hyper which can be activated with the smartbomb key when ready. It puts your ship on steroids so to speak making you more powerful. Won't last forever though so use carefully.

The game may not be the prettiest graphics-wise but that should not really disturb too many fans of the genre. What's important is the bullet per inch count and the game shines when it comes to that. Sure, there are games out there that throw even more bullets at you but those are probably reserved for the minds of Japanese people who play those games one-handed and a few brave ones from the rest of the world.

The game is difficult and since there is no difficulty level to start with, you will run into issues quickly when you start playing the shoot em up. The first couple of waves are easy to deal with but once you are beyond the first mini boss you will certainly come to the realization that this is not easy as pie.

The current version of the game consists of five stages each with a boss at the end of the stage and with smaller encounters throughout the level.

What more? If you really beat the game - congratulations but do not rest yet - you are in for a replay of the game that will be more challenging.

Here is a short video highlighting the first level of the game.

You find the game download link on this thread over at the system11 forum.

If you like shoot em up games and bullet hell games in particular, then you will definitely have fun playing Trigonometry Wars 3 Redux.