I reviewed many arcade shoot em up games in the last weeks here in this series and decided to mix the series up a little bit. This time I'm going to review Siege Knight, a Flash-based Tower Defense game. It is similar in concept to the Last Stand series only that you do not fight against zombies and undead but in a fantasy world against skeletons, orcs and other creatures of the dark.

The game concept is pretty easy to explain. You defend your castle against attacking hordes of darkness. You win if you defeat all attackers, you lose if the attackers reduce the hitpoints of your caste to zero.

You start with some gold at the beginning of each level that you can invest in traps. At the beginning, you only have access to one trap, the spike trap, which you can place on the battlefield. Enemies that walk over it get damaged doing so.

Later on, depending on how you spend your upgrade points, you get access to additional traps, a mage's ice trap for instance, but also soldiers that you can place on the battlefield. The archer shoots at enemy targets for instance while the knight is a sturdy fighter that is great as a last line of defense, or to defend the weak archers from getting hurt. 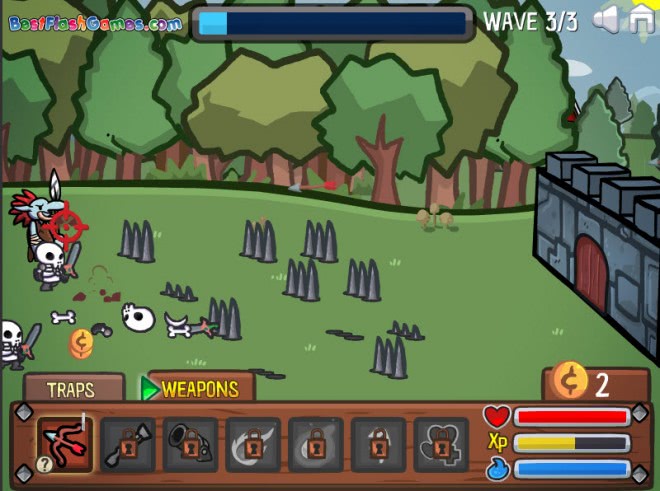 As far as weapons go, you start with a bow but can use upgrades to add a musket and cannon to your arsenal. If that is not enough, you can also unlock spells, fireball, iceball or a healing spell and use it in addition.

Each level is divided into waves of enemies, usually starting off slowly but increasing in pace as the waves pass by. Your task, after having placed the traps, is to use the cross-hair to shot at enemies. Just hold down the left mouse button and start to fire your arrows - later on bullets and cannon balls - at the attacking forces.

Enemies drop coins to the floor that you need to pick up and provide you with experience that you use to upgrade. You can place traps at any time on the battlefield. Note though that it takes time to build them so you better do so when you have ample time for that.

You can spend upgrade points immediately when you level up by selecting upgrades in the three skill trees it makes available.  Some upgrades require you to spend points in previous upgrades before they are unlocked and become available for selection. The protector skill tree is about traps and buildings mostly, but you can unlock the knight here as well and make knights berserkers when their HP drops below a certain threshold.

The champion tree unlocks new weapons and makes existing weapons more powerful. You can unlock the archer here in addition to that and make the archers arrows poisonous.

The sorcerer tree finally unlocks magic traps like the freezing trap and magic spells that you can hurl at your enemies.

Siege Knight is a fun game, at least for a while. It is a bit too easy for my taste even though the difficulty level increases near the end of the game. Siege Knight gives you this "one more level" feeling that makes it hard to resist playing just another level of the game before you call it quits for the day.