The Last Stand series is all about survival after a Zombie apocalypse. Previous games were stationary games where you had to defend a location against attacking zombie hordes. It featured some role playing elements, like searching for food, finding better weapons and other survivors to help out in the defending at night.

The last game by ConArtists is called The Last Stand - Union City. Unlike its predecessors, it is a side scrolling action adventure type of game. You play the role of a guy (or girl) who awakes after a car crash to find out that zombies have taken over the once pretty neighborhood.

The game has several RPG elements which become apparent right on the character generation screen. You can pick one of the preconfigured roles, e.g. military man, fire fighter or create a custom character. 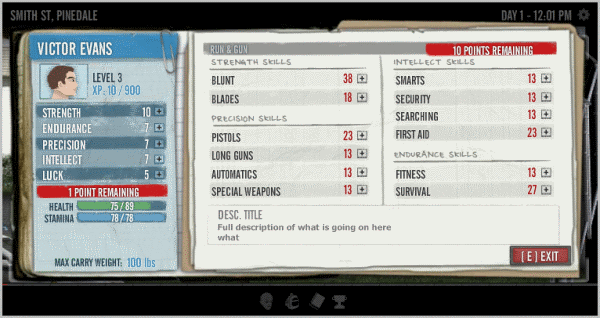 Characters have five major attributes and twelve skills to choose from. Each attribute defines specific traits of the character. Strength for instance lets you carry more and put more force behind blunt weapon attacks, while precision makes you deadlier with guns.

The survival skills can be compared to the skills of the Fallout game. You increase them to be more proficient with a certain type of weapon, improve your ability to use first aid, break security or increase your overall survivability on the streets. 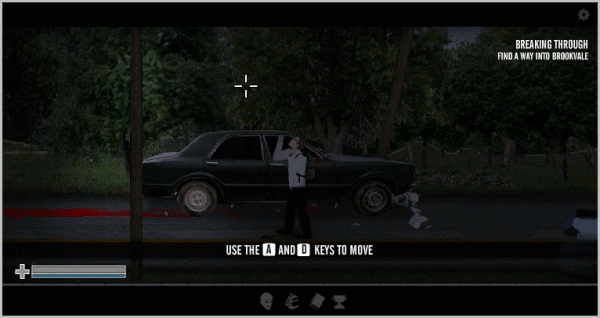 You control the character with WASD on the keyboard. The AD keys move the character in the selected direction, W jumps and D ducks. Attacks are carried out with the left mouse button. Tab opens the character menu where you can equip weapons, eat food, use first aid or equip other stuff that you may need in a specific situation.

The game has many parallels to the Fallout game series. You find books for instance from time to time that you can read to increase your skill sets.

You use the E key to interact with objects. This can be a door that you want to open, a trunk or items that you want to pick up. You need to move with the mouse over the item before the option to interact with it becomes available. You also use E to talk to people. These people may give you quests that you can complete for some extra experience points. Sometimes, you need to complete a quest before you can processed to the next block of the street.

Other keys that you will need are R to reload a weapon, F to turn on the flashlight and G to give a weapon or save a companion. 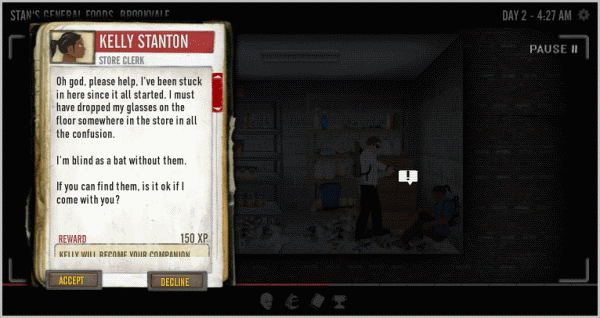 The game itself is pretty straightforward. You basically move from the area entrance to the right and investigate every building that you come across that you can enter. Not everything that you find in the game has a purpose. You will find lots of junk items on your way that you should not pick up as you'd reach your maximum carrying limit very fast otherwise.

The Last Stand - Union City is a well designed browser game with nice graphics and gameplay. The game will keep you entertained for a long time, and even if you beat it you may want to replay the second game mode that is offered on the start screen.

Head over to Armor Games to play the game in your browser.