Many PC gamers want the latest and greatest when it comes to game technology on their systems. This includes faster better hardware to improve visual elements of the game and frame rates, but also software improvements in the form of drivers and components such as DirectX.

Remember the release of Windows Vista? Back when it was released Microsoft made DirectX 10 a Vista exclusive, leaving Windows XP users standing in the dust. While there were not that many games out there that made use of DirectX 10 features, it was something that many gamers did not take lightly. One of the main reasons why DirectX 10 exclusive features were not implemented into a lot of games at that time was that the majority of gamers, who were still using Windows XP at that time, did not benefit from them. Instead of optimizing the games using the latest technologies, many game companies instead decided to use DirectX 9 technologies exclusively for their games.

DirectX 11 was unveiled in 2008 by Microsoft and implemented natively into the company's Windows 7 operating system. A version for Windows Vista was made available as well so that both Vista and windows 7 users were able to benefit from the improvements made. Windows XP users on the other hand were still stuck with DirectX 9.0c, the latest version released for the operating system. 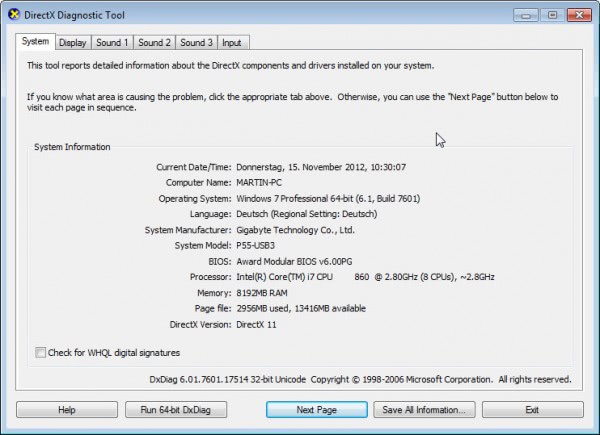 DirectX 11.1 shipped with the Windows 8 operating system in October 2012 but not for previous versions of Windows. Some components of DirectX 11.1 are made available to Windows 7 as part of the Internet Explorer 10 Preview release for the operating system, or a standalone update package.

Even though some features are being made available on Windows 7, it effectively means that Microsoft has made DirectX 11.1 a Windows 8 exclusive. It is not clear how things will progress from here. There is still a possibility that Windows 7 will receive the DirectX 11.1 update eventually, or the next big version update whenever it is released.

It could on the other hand also mean that Windows 7 won't receive any more DirectX updates in the future. Windows 7 users are then facing the same situation that Windows XP users faced back then, with the difference that their operating system has just been out for a little bit over three years.