Revolgear 2 is a traditional shoot em up game that reminds me a lot of Konami's Thunder Cross series sans the two player mode.Â  The game is fully portable and can be played right after you have downloaded and unpacked it on your system.

The Japanese site the game was hosted on initially is no longer available. We have uploaded the latest release version of the arcade game to our own download server. Note that we don't support the game in any way and have done so purely for archiving purposes. Download a copy of Revolgear 2 with a click on the following links: Revolgear Part 1 and Revolgear Part 2 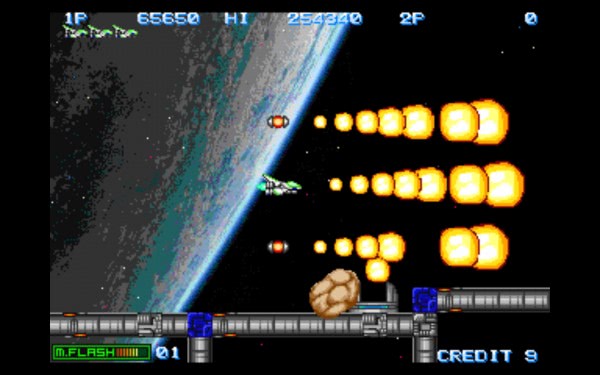 You can run Revolgear without installation on any compatible Windows PC. You need to select one of the four available space ships at the beginning of the game, each with its own set of weapons and features.

The different weapons that you get are highlighted during the selection process so that you know what you get when you pick a ship. From homing missiles to fire attacks, attack forms vary a lot from ship to ship.

Graphics, sound and enemy formations have that distinctive 16-bit vibe that veteran gamers have experienced first hand during the 16-bit era. The game itself is a straight shoot em up game with a few extras thrown into the mix to make it more interesting to the gamer. You control your ship with the cursor keys, shoot with C and change the distance of your satellites with Z.Â  A special attack builds up during game play that you can unleash on the enemies as well.

You start with a basic space ship which you can improve by collecting upgrades that some enemy formations or ships leave behind on the screen when you destroy them. Power ups change colors over time, with each color representing one of the ship's firing mechanics. If you collect the wrong one, you may end up with a different firing mode that may not be helpful in a certain situation. To add to this, there are white and pink spheres as well that increase the speed or reset the weapon back to the default. So, pink is best to be avoided. 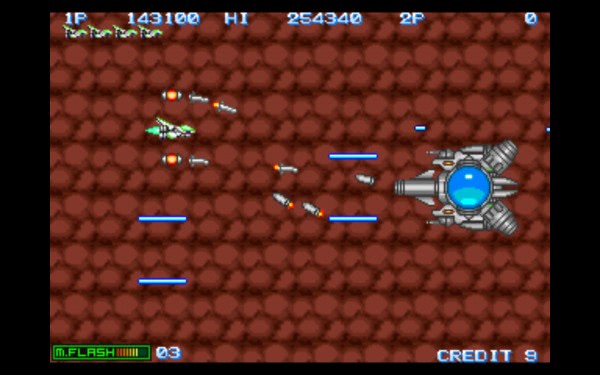 Revolgear 2 is not a hard game, and if you have played similar games in the past you should be able to blast through the first few levels without problems. A boss waits at the end of each of the five stages for you, and it takes some skill to avoid the barrage of fire during the fight.

It is a nice game all in all that should keep you entertained for a while, considering that you can replay the game using one of the other space ships.

Probably the biggest issues that I have with the game is that it is not that difficult and that you can't change the game's difficulty level. While experienced players may find it too easy, inexperienced gamers or those new to shoot em up games may like Revolgear 2 because of that as it is not as frustrating as harder games that make it difficult to beat the first couple of waves if you are inexperienced.