The majority of computer games has become a lot easier in recent years. While there are still some games that give you a run for your money, Dark Souls comes to mind, the majority of games make failure nearly impossible. Games in the 8-bit and 16-bit era were not forgiving at all, and it often came down to playing a game repeatedly to memorize its structure to find out what worked and what did not.

Especially shoot em up games had their fair share of frustrating moments. If all you got were three lives and no continues, you'd better make sure that you did not lose a life in the first few levels of the game.

Why I'm babbling about times long gone? Because this week's game takes you back right into that era of computer games.

Hydorah is a free arcade game for the PC that takes a bit from here and there and mixes those elements up with some features of its own. The result is a game that looks and plays like a 16-bit era title. While it does not let you change difficulty levels - there is only one - it lets you save the game five times. You get the first three saves at the beginning, and the remaining two when you reach the middle of the game. The game itself consists of 11 levels so that you can't use a save after each level. 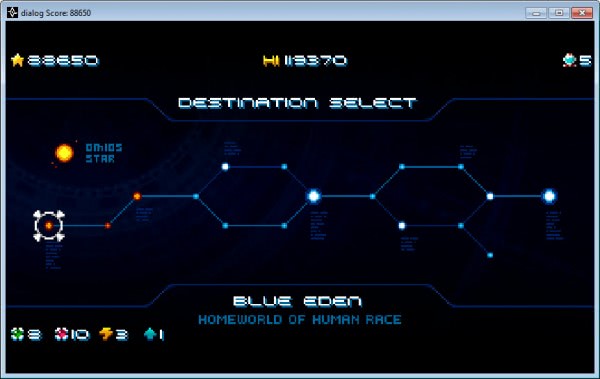 A map is displayed after each level which you use to select the next destination and to save the game. Hydorah has all the features of a great arcade game. You start with a basic ship that gets stronger the longer you play without dying. Enemy ships sometimes leave power up symbols behind which you should collect to improve your ship's fire power, maneuverability or power attacks. A shield drops in certain levels which will take one hit before it is removed again. Since your ship will crash when it is hit once, it is essential to pick up and keep those shields up as long as possible, especially since they are carried over to the next level.

You will also encounter bosses in the game, at the end of each level and sometimes even in the middle. These stronger larger enemies sometimes drop a weapon power up which you can equip your ship with. This improves the game's variety and gives you flexibility when it comes to beating certain levels. The game lets you change the controls and whether you'd like to play in fullscreen mode or windowed mode. The first level should not really be too difficult for experienced players. The second level on the other hand takes more effort, not only because it its throwing two bosses at you, but also because of enemy formations and terrain that you need to avoid as crashing into it will count as a hit.

Hydorah introduces several interesting game elements, like a storm that pushes your ship back if you do not move forward, or sand that is dropping from the ceiling that will push your ship down. Boss fights too are diversified and it usually takes a few tries before you beat a boss to proceed to the next game level.

All in all it is an excellent game with great 16-bit era music and gameplay. If you like shoot em up games this is definitely one that you should pick up.