Takeover is a free strategic Flash game in which you take control of a tribe out of three that the game makes available to you. The game plays on small regional maps on which you usually start with one or two buildings under your command. The main task here is to conquer all enemy buildings with troops that you need to recruit. The game features half a dozen or so different types of troops, from basic foot soldiers to archers and cavalry, that have all their strengths and weaknesses.

Three types of building are available that determine the troops that you can hire. Towns for instance only let you hire foot soldiers and archers, while fortresses add cavalry and siege engines to that. The third building, the magic tower, makes available specialized units and access to an ultimate spell like cataclysm or summoning an avatar to the battlefield.

All buildings can be upgraded twice which improves their hitpoints and enables the recruiting of veteran or elite units that are sturdier in battle. 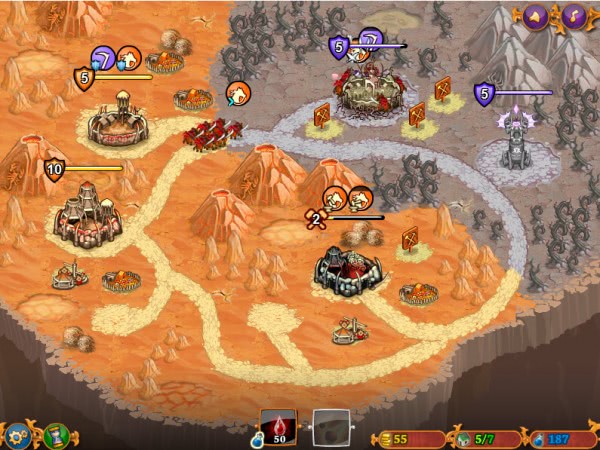 Up to three smaller buildings can be added to each larger building which increase the gold earned per turn (mine), the mana (obelisk), or the maximum number of troops (farm). Farms are especially important as you usually start with enough supplies for two unit types, not enough to defend and conquer the entire region.

Each of the three factions has access to different unit types and spells that you can make use of. The Duchy of Westaria for instance has access to a heal spell, while the Crimson Horde to bloodlust which increases attack power for a short period of time.

You will also find ogres on some maps that protect gold chests which add 500 or so gold to your treasury which usually is a welcome addition early on in the game as you need lots of money to improve buildings and recruit troops.

You move around the troops via drag and drop on the map, which works well most of the time. You can even draw a rectangle around troops to command multiple units at once. What does not seem to work is retreating once a unit has engaged another in battle which is a bit unfortunate as it would add another strategic element to the game. You can however move wounded troops back into your buildings were they recover their wounds over time. 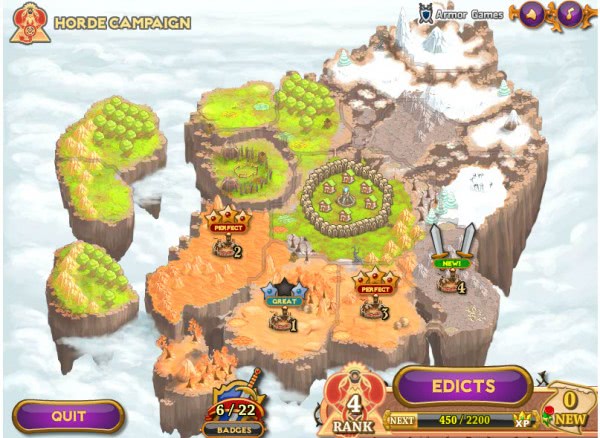 You gain experience when you win a battle, which in turn awards you edict points which you can invest into power ups of sort. You can make your spells more powerful or last longer, turn basic troops into sturdier ones or reduce the recruiting costs of units.

Takeover is a fun game for a while. It lacks a bit in the diversity department as most battles play out more or less the same. You start with little money, recruit one or two units, try to defeat an oger or conquer a building, and go from there. Some challenges, for instance maps without buildings would have made a nice addition to the game. Still, if you like strategy games then this one will keep you entertained for an hour or two.