You can best describe Boss Rush as a reverse shoot em up game. Instead of having to fly through levels and beat boss enemies at the end, you take the role of a boss that tries to defeat enemy ships before they complete missions or defeat you. The game starts with a tutorial that explains basic game concepts. Basically, you press the left mouse button to fire a standard attack, and tap on numbers for special attacks when they become ready. The WASD keys are used to move the boss around on the map, with the lower part of the screen blocked.

Tasks range from blocking attacking vessels from collecting power ups, over killing the enemy ship but not other objects on the screen to staying alive for a select period of time. 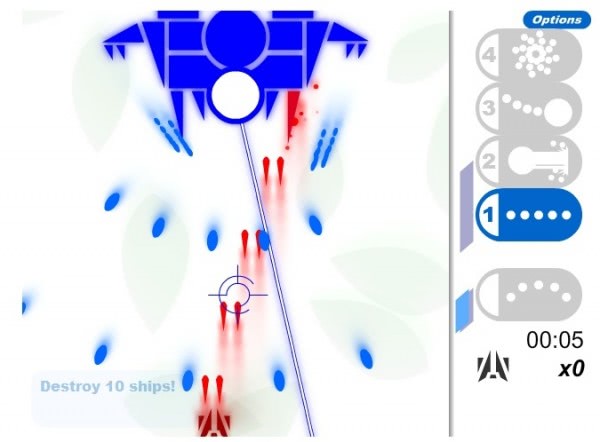 The game is divided into levels that you need to complete to advance. Additional bosses are unlocked when you reach certain levels which play all different thanks to different shapes, sizes and weaponry. Most bosses play completely different. One is a snake like creature that is constantly moving, another a spaceship that uses thrust to move.

As far as weapons go, only the weapon mapped to the left mouse button is always ready to be fired. The remaining special weapons build up on each other. To launch weapon 4, which usually is the strongest of the available weapons, you need to hold your fire until it activates. When you fire one of the other weapons the energy bar goes down so that you have to wait longer to fire a weapon with more firepower.

Experienced shoot em up players may want to switch difficulty levels to hard or Sparta from normal once they get unlocked. The game features a survival mode, which you need to unlock as well. If that is not enough, you can also play against another human player on the same computer with one player playing the boss while the other taking command of the space ships that attack the boss.

Boss Rush is a fun game for a short break. Levels do not last longer than 2 minutes usually. If you like the game, you can spend hours playing it though, with all the unlocks, difficulty levels and game modes it throws at you.

Want a game video instead that highlights how the game plays? Here you go.