Stardock released the Start8 program back in March of 2012 to bring back the start menu to the Windows 8 desktop where Microsoft had removed it from. The removal has been criticized vocally by users of the operating system who were using the start menu on a daily basis for some activities on the system.

Third party developers have created solutions that bring back the start menu to the Windows 8 operating system. Classic Shell for instance brings a classic Windows start menu to Windows 8. Stardock's Start8 went a different route, as it effectively added part of the Metro interface as a start menu to the desktop. You see a listing of installed apps and desktop applications in the main interface, and the Metro search menu on the right.Â  Here you can quickly enter a program name or part of it to filter results based on the term that you have entered. 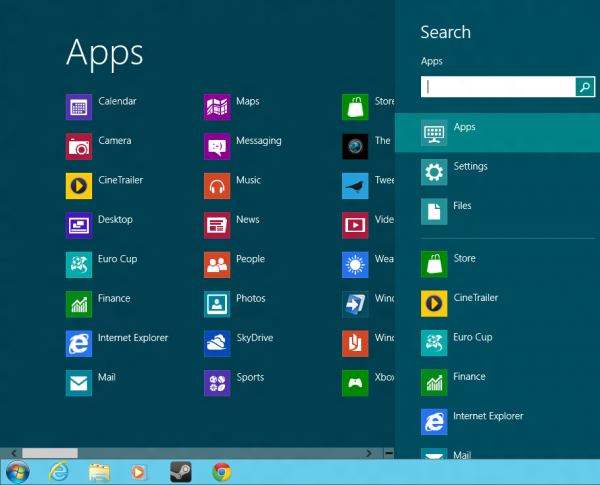 And if you are not looking for apps, you can switch to settings or files instead. It is a bold move that not all users may be comfortable with. Especially users who are looking for a traditional start menu may use a different solution like Classic Shell instead. Windows 8 users who like the search feature of the operating system on the other hand may like the approach as it is providing them with the same interface and functionality on the desktop.

Start8 has been updated recently to bring another requested feature to Windows 8: the ability to skip directly to the desktop on start of the operating system. The program displays a prompt during installation whether the action is desired. Users who want to change the option later on can right-click on the start menu orb to enable or disable the feature.

When activated, Windows 8 will simply switch directly to the desktop after the user has signed in to the operating system. The menu lists options to change the size of the start menu on the desktop, the run command and the option to shutdown the operating system. The download is not available on the Stardock website. When you go there, you have to enter an email address where the download link is sent to. You find the program listed on various download portals as well.