Security Analyzer is a free program for the Windows operating system to assess the system's security status. The application works in some regards identical to Microsoft's Action Center control panel applet. Unlike Microsoft's built-in tool, it provides additional information and options to see if the system is protected properly.

The program runs a quick scan once you start it on your system. The information gathered from the scan are displayed in the program interface, along with a general assessment of the system's security.

The program analyzes the following Windows Client settings and programs: 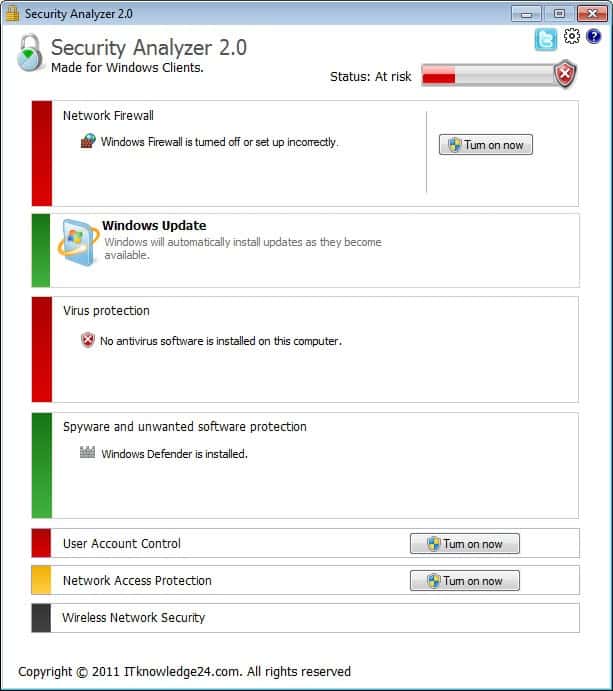 The overall system security status is displayed at the top, and the status of individual settings and programs in colors next to each setting. Red indicates a feature that is either turned off, not installed or mis-configured, and green that the settings are protecting the system properly.

Some settings were not properly identified on the test system. The User Account Control for instance was shown as turned off, even though it was turned on (but moved one slider down to block the dimming of the desktop during prompts). The Microsoft Security Essentials installation was not detected by Security Analyzer, which in turn gave the system an "at risk" rating in this department as well.

Buttons are displayed for some features to turn them on again. This is the case for Windows Firewall, the User Account Control and Network Access Protection.

Security Analyzer is compatible with all recent 32-bit and 64-bit editions of the Microsoft Windows operating system.

Martin Brinkmann is a journalist from Germany who founded Ghacks Technology News Back in 2005. He is passionate about all things tech and knows the Internet and computers like the back of his hand. You can follow Martin on Facebook or Twitter
View all posts by Martin Brinkmann →
Previous Post: « Microsoft Beta Day, Windows 8, .Net 4.5, Visual Studio 11
Next Post: Windows 8 Tips For Professionals »