Many notebooks, laptops and netbooks ship with a smaller sized keyboard that lacks some of the keys that are on standard sized keyboards. This often includes media keys like play, pause or changing the volume, but also keys like numlock or other numpad keys. These keys are usually removed because of size constraints. Manufacturers add the Fn key (short for function) instead to those keyboards to allow users to access those keys in a different way.

Most laptop keyboards display a key's Fn action in blue on the keyboard. To activate one of the features, one has to press the Fn key and the key the function is mapped to.

Function key layouts may differ depending on the manufacturer of the laptop. Media keys most of the time are mapped to the F-key bar at the top.

One of the issues here is that it is often not that comfortable to use these keys. It may be difficult to nearly impossible to use the functionality with just one hand.

SfunKey has been designed to provide comfortable access to some of the extra keys. It maps a total of 12 keys to the F-keys on the keyboard. These features can now be activated by pressing the key twice on the keyboard, which is more comfortable than having to use the Fn key with one of the F-keys. 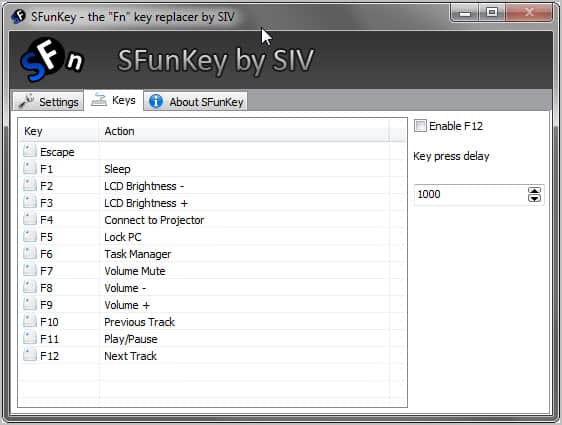 The F12 key is not active by default, as it is often reserved by the system.

The program displays selected actions in an on screen display by default which can be disabled in the program settings.

Incompatible programs can be added to the compatibility listing which blocks program features when those applications are running on the system. This may be useful for full screen games for instance.

SFunKey is a handy portable program for mobile users who prefer to access media actions and other actions without the Fn key. The program is compatible with all recent 32-bit and 64-bit editions of the Microsoft Windows operating system.

Previous Post: « On Keeping An Open Mind When It Comes To Windows 8
Next Post: Zer0 Makes Sure Deleted Files Can't Be Recovered Anymore »