On Keeping An Open Mind When It Comes To Windows 8 - gHacks Tech News
ghacks.net

On Keeping An Open Mind When It Comes To Windows 8

As a Windows user, I'm keeping a close eye on all Windows 8 development tidbits and leaks that I can find online and offline. Most of what I know comes from the developer preview version of the operating system that was released last year and leaks that seem to have picked up in pace recently.

I have to admit that I have not used the Windows 8 Developer Preview that much, mainly because I could not find a suitable way to work with both the Metro UI and my desktop applications.

It always felt like I had to switch between the Metro UI and the desktop constantly to start and work with the programs I wanted. I never warmed up to the idea of gadgets or icons on the desktop either, and it feels to me as if Metro UI is a modern version of that.

The Metro UI start page feels out of place, like something that would make life more complicated instead of easier. I have to admit that I did not test it on a touch enabled device, and it probably makes more sense there. Most Windows PCs on the other hand are not connected to touch screens, and even if that number will increase in the future, I cannot see myself connecting my desktop PC to a touchscreen for a number of reasons.

The switching between the desktop and Metro UI does not make much sense to me at all. Why do I have to use Metro UIs search to find applications that I want to launch on the desktop? Why is there no file launcher directly on the desktop?

For me, it is nothing more than a startpage, just like Opera's Speed Dial feature for instance but with the difference that it does not make it more comfortable to open applications I want to run. Another thing that bothered me in the developer preview was the limit of two open application windows at a time in the Metro UI interface. On my desktop, I always have two web browser windows displayed next to each other. More often than not, I also have a video player open, an instant messenger, image editor or another program that I'm also using regularly.

Recent leaks highlight another change that is likely going to make it into the beta and final release of Windows 8. Microsoft has removed what's left of the start button from the desktop interface of Windows 8. If you have worked with the developer preview you may remember that the start menu was limited to five charms links there. With the start menu gone in current builds, users need to activate the charms menu otherwise to access its functionality. 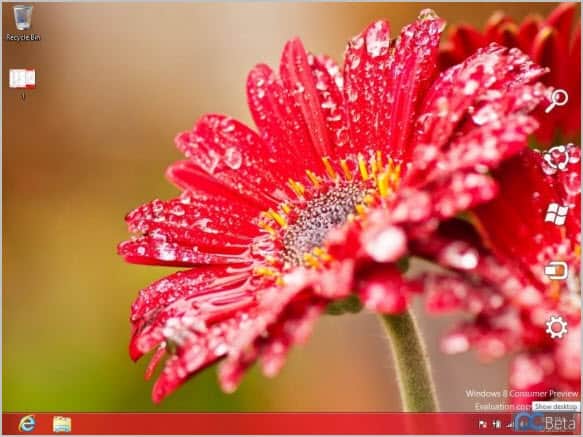 Charms appear when you move the mouse over the area the start menu button was all those years. You can open them with the keyboard shortcut Windows-c as well. Moving the mouse to the lower left corner to open the charms menu on the rightmost location does not seem to make lots of sense from a usability point of view. It is likely that Microsoft will improve that to make it more intuitive to use.

The core problem as it stands right now is that users do not see options to return to the Metro UI interface. There is no button or tooltip that explains how this is done. If Microsoft fails to provide those, or at least a thorough tutorial after installation, it could end disastrous.

It is hard to keep an open mind at the moment. Everything that I have seen and tested so far looks like it is impractical for the desktop. Still, it is too early to tell and leaks are not always a reliable source anyway. It is likely that we will know more after the Windows 8 beta gets released by Microsoft.

I still hope that Microsoft will pull something out of a hat that will make all my worries go away. The only thing that I can think of right now that would do that is an option to turn off Metro UI, or give me more control when Metro UI is activated, and when it is not.

Am I the only one who thinks that two user interfaces is one too many? That Metro UI is impracticable on desktop PCs?

Update: After reading through this again it appears to have become more of a rant than what I intended it to be.

Summary
Article Name
On Keeping An Open Mind When It Comes To Windows 8
Description
As a Windows user, I'm keeping a close eye on all Windows 8 development tidbits and leaks that I can find online and offline.
Author
Martin Brinkmann
Publisher
Ghacks Technology News
Logo

Martin Brinkmann is a journalist from Germany who founded Ghacks Technology News Back in 2005. He is passionate about all things tech and knows the Internet and computers like the back of his hand. You can follow Martin on Facebook or Twitter
View all posts by Martin Brinkmann →
Previous Post: « Screenshot Captor 3 Released
Next Post: SFunKey, Make Fn Key Actions Directly Accessible »