Every now and then you may want to make sure that files that you delete on a PC cannot be recovered anymore by other users.

This may be important if you are passing on the PC to another user, working on a multi-user PC, public computer, or system that others may have access to. It may even be a good precautionary method before you are passing borders with your notebook or mobile device.

Some might now bring forth the old argument of having nothing to fear if you have got nothing to hide, which has been refuted over and over again. One argument against is that you may value your privacy; there is really no need for someone else to see family photos, financial documents or private email messages when you are crossing the border for instance. 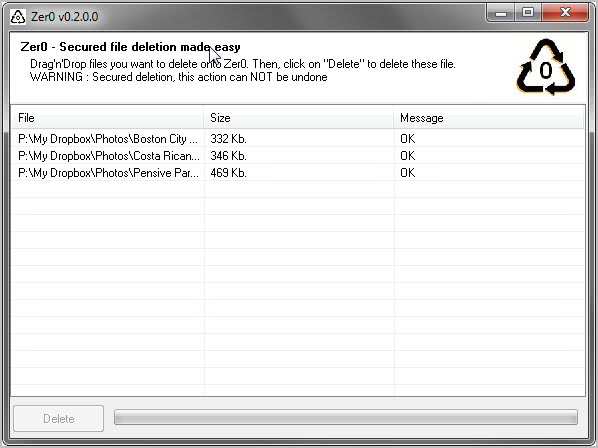 Zer0 is a simple program for Windows that deletes files so that they are no longer recoverable on the system. The developer states that it is using a "high security file deletion" algorithm, but fails to elaborate on that. Tests by us confirmed however that files can't be recovered with software like Recuva or Undelete My Files anymore after they have been processed by Zer0.

While that may do for private use, it is not recommended for corporate environments because of the lack of information.

Files can be added via drag and drop to the program interface, or by using the File > Add Files menu at the top. Each file is listed with its full file path, size and a status code.

A click on delete removes the selected files from the system and overwrites the occupied space on the hard drive so that it cannot be recovered afterwards. Successful deletions are indicated in the status column in the interface.

Zer0 is nowhere near as sophisticated as Eraser for instance. The program still gets the job done even though you'd probably would want to skip it if you are deleting a lot of files regularly on the system.

You can download the program from the developer website.  The installer is clean and does not contain unwanted offers or other surprises. Note that the program will open a webpage on the developer's site after successful installation and that Zer0 attempts to connect to the Internet to check for updates.

The most recent version features a link to one of the developer's other programs.

Free File Wiper is an alternative that provides more information about the file deletion process.

Zer0 is a handy, fast secure deletion program for Windows. It could do with additional information on the process, and should warn you when you add files from Solid State Drives to the program as those won't be deleted securely due to the nature of these drives.