Transfer Video To DVD With DeVeDe

We have covered the video DVD creation software DeVeDe twice here at Ghacks. First a review of the Windows version (see Video To DVD) in 2008 and then of the Linux version (see Create DVDs in Linux with DeVeDe, mkisofs, and K3B in 2009).

The Open Source software has been in continuous development especially the Windows version has seen improvements that justify a new look at the application.

DeVeDe displays a disc type selection wizard on start up. Most users will use the program to transfer video to DVD but it can also be used to create Video CDs, Super Video CDS, China Video Discs and Divx and MPEG-4 media files compliant with players that support the formats. 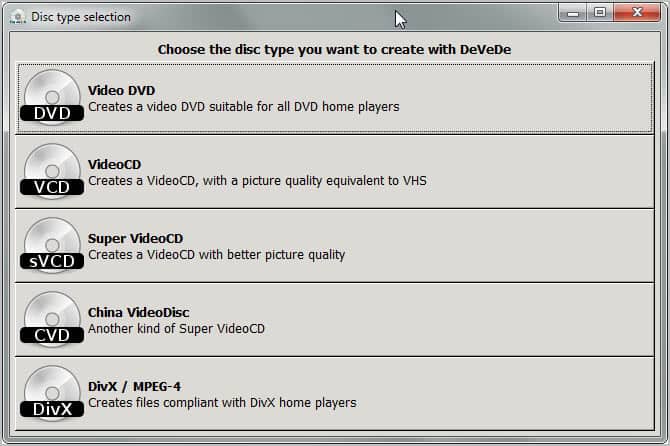 Once you have made your initial selection you are taken to the disc structure menu. You add video files that you want to add to the disc using the menu. The add video window offers many configuration options: from selecting audio tracks to adding subtitles and previewing the selection.

The program displays the total disc space requirement which can be used as an indicator of how much free disc space is left on the selected output disc format. It can happen that the file size of all videos that you want to burn on the disc is larger than the available disc space. DeVeDe supports sizes between 1.4 Gigabytes and 8 Gigabytes when it comes to CDs and DVDs. 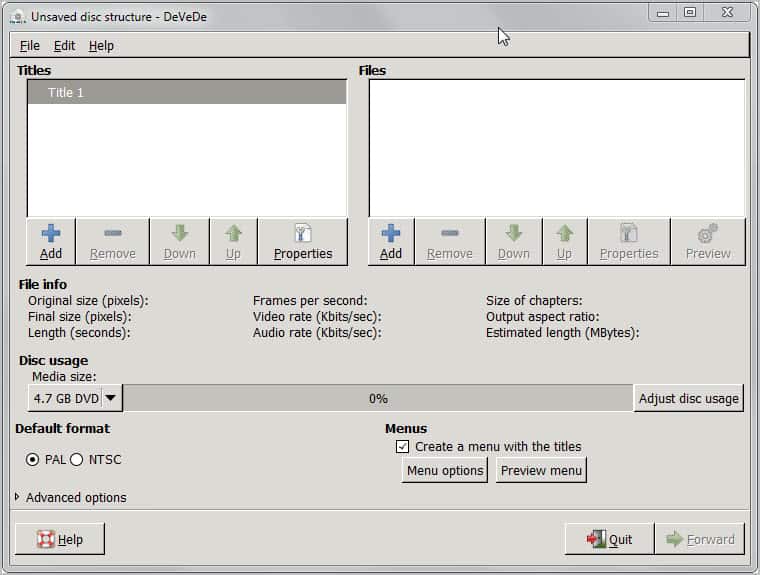 The program displays information about the selected video source and output. This includes the original and final size, the play time, video rate, audio rate and frames per second.

It is furthermore possible to edit and preview the menu here. Editing options include changing fonts, selecting menu background images and menu music, changing a title's position and if the disc should display the menu on startup or play the first title right away. 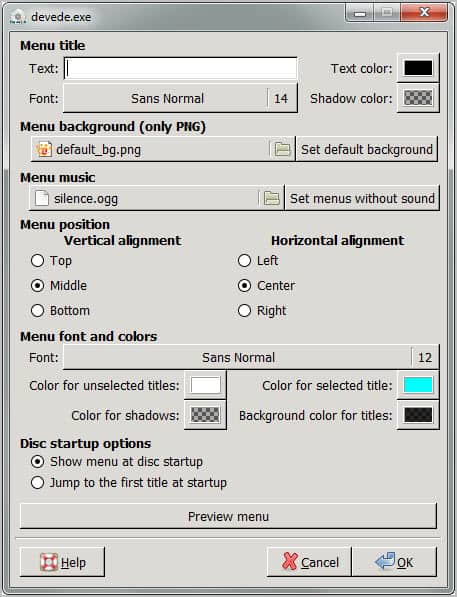 A click on Forward in the main configuration window runs the conversion. Devede creates an ISO image by default, the output format can be switched to a Video_TS structure or a conversion of the films to compliant MPEG files.

Another useful feature is the preview option that DeVeDe comes with. You can use it to play a preview copy of the videos with the selected settings so that you can check out the quality of the picture and audio, and other things.

Windows users can download DeVeDe from the Windows project site. the program is compatible with all recent 32-bit and 64-bit editions of the Windows operating system. The program manual, support forum and source code can also be accessed there. Linux users find the latest version of DeVeDe on the site as well.

The DVD authoring tool is a suitable program both for inexperienced and tech savvy users. Inexperienced users can create video DVDs with just a few clicks. Experienced users will like all the advanced options that the program offers as it allows them to customize the output significantly.

Inexperienced users can create video DVDs and the other supported disc formats in record time. While it may require some converting which DeVeDe handles automatically, it is an excellent option when it comes to creating video CDs and DVDs on Windows and Linux.

Experienced users have all options available to them so that they can customize the output quite a bit: from changing bitrates to adding custom menus or defining "when finished playing" actions to each video file.