With Skype now being a Microsoft Division it was clear that some things had to change. There is still a lot of speculating going on in this regard. The Skype development team has released Skype 5.6 for the Windows operating system and an update for Skye 5.5 that removes the Google product bundling from the software's installation process. Up until now Skype users on Windows had the option to install the Google Toolbar on their operating system during the installation of the Skype voice over IP software. This bundling has now been removed with the released update.

But this was not the only cooperation that Skype had with Google. Skype users who ran automatic updates of the software received options to install the free Google Chrome browser with those updates. 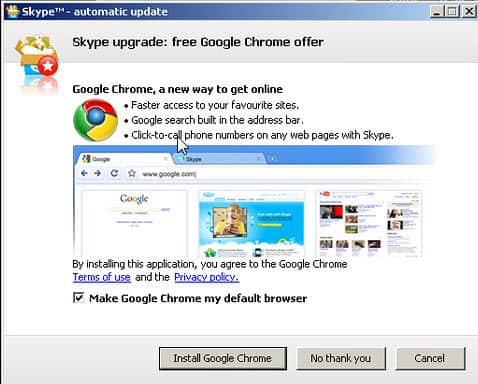 For now Skype users who install the software on Windows will see no third party product offers. Less toolbars is always a good idea. Some users on the other hand have speculated that it is only a matter of time before Microsoft starts promoting its own products with Skype. The logical choice at this point in time would be to add the Bing Toolbar to Skype. Then again, this would certainly infuriate some Skype users.

The Skype update has also fixed two issues. The first issue was a memory leak in the Skype Firefox plugin, the second a crash of the Skype software at startup on Microsoft's upcoming Windows 8 operating system.

One question remains though: Why is Skype maintaining two different versions of their software on Windows? What's the difference between Skype 5.5 and Skype 5.6 that justifies two versions?

According to a speculative forum post on the Skype community forum it is to "compare user behavior". Another user in the same thread suggested that the version difference has been introduced to test in-call advertising.

windows users can download the latest version of Skype on the announcement post over at the Skype blog.