When you review a lot of backup software like I do, you notice similarities and differences. There are however features that make backup programs more attractive, like an uncomplicated setup, sufficient local and remote backup options or automation to run backup jobs regularly after the initial setup.

The free backup software Duplicati offers all of this, and then some more. The program displays a backup setup wizard automatically after installation. The wizard walks the user through the process of creating the first backup job.

It begins with the selection of a name and the folders and files that should be included in the backup. Duplicati suggests several common Windows folder out of the box, My Documents, My Music or all desktop files for instance (if Windows is the operating system of choice. The program is also available for Linux) Users who store their data elsewhere can add custom paths to the backup easily in the same step. 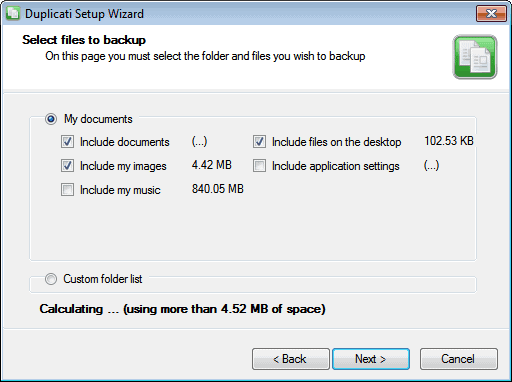 The space requirements are displayed on screen, and re-calculated whenever folders are added or removed by the user.

Backups can be protected with a password. The default encryption is a built-in AES 256 bit encryption algorithm with the possibility to switch to the GNU Privacy Guard for protecting the backup data. GPG is a free alternative to the popular PGP.

The backup destination is configured in the next step. And this is where Duplicati shines. Available are local and remote backup locations. From Amazon S3 and CloudFiles over WebDAV based, SSH based to plain ftp backups and local folder backups. It is all there and easily configurable. 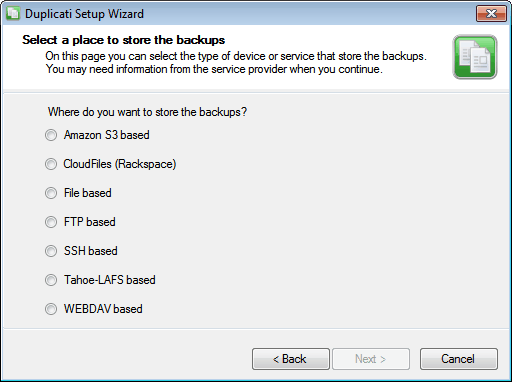 It is necessary to enter a path, and if a remote backup location has been selected authentication to complete this step.

The last step displays several advanced options, allowing the user to schedule backups, configure rules when to remove older backups, size and bandwidth limits or filters to include or exclude files from the backup.

The backup can be started right after the setup wizard or at a later time. 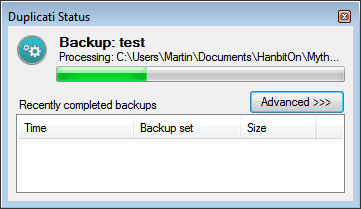 Most backup settings can be configured for all jobs directly in the program options. Here it is possible to set an encryption method and password, authentication settings for Amazon S3, SSH and other services or the system's GPG path.

It is possible to change settings and configure new backup jobs even while a backup is running in the background.

Backups can be restored at any point in time, but only by running the software program and selecting the data restore option.

Duplicati is an easy to setup backup program for the Windows operating system and Linux. Is there anything that is missing or a feature that could be improved? Well, it would be great if advanced users could configure backups on one page to speed things up. For now, it is only possible to use the wizard to create backup jobs. A missing feature is the ability to backup hard drives or partitions. Another feature that is missing is an option to restore backups externally.

Windows and Linux users who are looking for a lightweight, highly configurable backup software should download Duplicati for a test ride. The program is compatible with all recent versions of the Windows operating system.