Do you remember the game Bubble Bobble? It came out for lots of different 8-bit and 16-bit systems, and even had a spin-off called Rainbow Island, which in my opinion was even better than the original.

Bubble Bobble is one of those franchises that everyone knows about, even though it has not really been active in the past decade or so.

Fans on the other hand keep the franchise alive with fan remakes and adoptions.

Bubble Hero 2 is a game that is true to the original in many aspects. It comes with a single player and 2-player game mode and features the very same game mechanics. 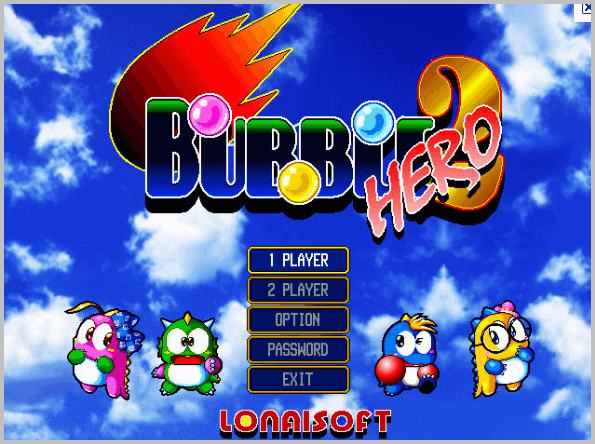 Your goal is to clear a level of creatures that are walking or flying around in it. For that, you have your bubble attack. When you press the corresponding key on the keyboard or button on the gamepad you shoot a bubble. If a creature is in reach it will be enclosed in the bubble and start floating to the top. You now need to touch the bubble to take that creature out of the level. Repeat the process for all creatures in the level and you have made it and will advanced to the next.

Your dinosaur can walk, jump and shoot bubbles. Extras are sometimes placed on the map which can give you special attacks like a lightning that can clear a level by itself, or shoes that make you faster.

The game has been released in 1999. Graphics, animations and sounds are fine, with the exception of the background which feels somewhat distorted in the game. 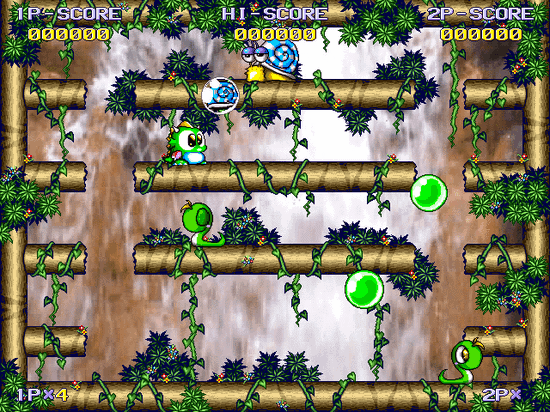 You will sometimes encounter boss creatures which you beat by shooting your bubbles against the walls to free stars that attack them.

Bubble Hero 2 is a nice remake of an all-time classic. You can download the game from Gamezworld. The game ran fine on a 64-bit Windows 7 system.

Martin Brinkmann is a journalist from Germany who founded Ghacks Technology News Back in 2005. He is passionate about all things tech and knows the Internet and computers like the back of his hand. You can follow Martin on Facebook or Twitter
View all posts by Martin Brinkmann →
Previous Post: « Edmus [Game Saturday]
Next Post: Pushover [Game Saturday] »