I somehow missed to post a game review yesterday and decided to post it today instead. Today's game is called Edmus. It is a Flash game that looks on first glance like one of those jump and run games that you find in heaps on every flash game site on the web.

Your task is to survive for as long as possible. Your controls are limited to jumping and double-jumping which itself is not very spectacular.

But Edmus offers more than just pressing the jump button at the right time. What makes this game stand out from the rest of jump and runs is the fact that you do not race alone. You are accompanied by other players who have also played the game.

And this is where it gets interesting. You run with others, or more precisely with the ghosts of other players, just like you did when you played Super Mario Kart for the first time. 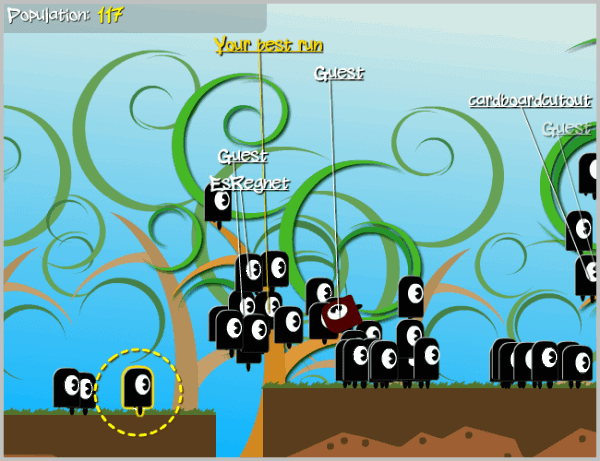 The player count goes down the longer you manage to stay alive which is a big motivator to try that level again. Level? There is only one that you can play, and it always looks the same. This means that you can memorize the layout and design to get better with time and practice.

Back to the jumps. You can use the left mouse button to jump, or nearly any key on the keyboard. They have all been mapped to jumping in Edmus. The longer you press the jump button, the higher you jump. This is true for a single and double jump in the game. Sometimes, you may not want to jump to high, as there may be obstacles in the way that you would crash into otherwise.

You can collect flowers in the game that act as a currency for upgrades. You can spend the flowers to increase your characters run speed, or single or double jump height.

These extras are bonuses that make the game easier, but it appears to be possible to get far without them.

The display of other player's successes and failures on the map is the main driving force behind the game. It motivates to see the player count drop while you are still racing, and even more so if you fail and see that dozens of players have managed to get past that point.

Edmus is a nice game, good for a few rounds of racing. There is not a lot you can do in the game though and lack of alternation means that it will eventually become boring. You can play Edmus over at Kongregate (via Gameokratie)