Diepix Arena 2 is a shoot'em up browser game featuring incredible music and fast paced action. You take control of a ship that you move with the WASD keys. You shoot with the mouse and get three extras that you can launch with the keys 123. Your task is simple: Survive the 50 waves of enemy ships that try their best to stop you from reaching your goal.

The game begins slowly to get you accustomed to the game pace and the different types of enemies that are thrown at you. 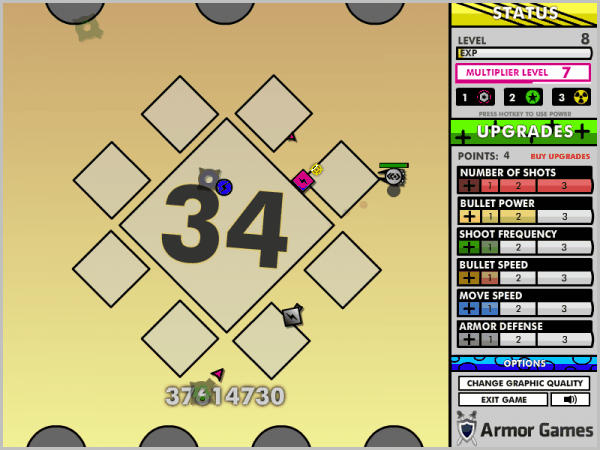 Enemy types come in a wide range, from standard cannon fodder that do nothing but move and standard shooting types to enemies that leave toxic waste on the arena floor when they die. You will also face a boss every ten levels which have more hitpoints than the standard ships. They are much harder to beat, especially so if you play the game on medium or hard difficulty.

The last ten levels are especially demanding as you face multiple bosses in each wave. You get experience and level ups, which you can invest in improvements like better ship armor, faster bullets or more bullets. Each improvement is offered as a basic, medium and advanced improvement costing one, two and three skill points respectively. You get two skill points per level up and end up with about 18 skill points total which indicates that you need to make decisions here. Do you go for the best armor in game to protect your ship, or do you prefer faster and more bullets. It is up to you and your play style.

The improvements are necessary to make it to the last waves of the game. Destroyed ships drop extras from time to time. These ranges from filling up ship health to a stationary cannon in the arena, seeking missiles or piercing bullets. It is extremely important to make use of those extras, especially in later stages of the game. You can only carry three with you around at times, so use them to free up slots if enemies have dropped more extras on the ground.

Experienced players should start with the medium difficulty right away. The hard difficulty is not available before you beat the game on easy or medium.

Diepix Arena 2 is an ideal game for a short break, as you can jump right in and start playing. It will keep you busy for about ten to fifteen minutes if you make it through wave 50, or less if you do not. You do not get many replay value though, except for the hard difficulty and beating the high score. That does not mean that you won't play it again though, but you'd probably move on pretty quickly. You can play Diepix Arena 2 at Armorgames. On a side note, Diepix Arena, the predecessor is available there as well.