Push-Over was a platform puzzle type of game in the early Nineties. I cannot remember a lot about it but the fact that you seem to have played an ant and that I played it on the Commodore Amiga 500. The game combined aspects of a platform game with puzzle elements. Dominoes are placed on most platforms and it was the player's task to find the right starting location to push them all over with the trigger domino being hit last. To make it more interesting, it was possible to move dominoes around, one at a time, to close gaps or use the special function of some dominoes.

Pushover is a remake of the Amiga classic. It is very true to the original game from what I can tell. The game is portable and should run on most Windows PCs. I had no problems running it on a 64-bit edition of Windows 7. You control the ant in the level and can move around with the cursor keys. Dominoes can be picked up by walking right in front of them and pressing space. You can then walk with a single domino to another location and press space again to place it there. It should be obvious that the new location needs to be clear if you want to place your domino there.

To push dominoes you walk in front of the one that you want to push and press the up cursor. Your ant moves closer to that domino then, and you can press the left or right cursor key and space to give it a push. This push will hopefully be enough to push over all dominoes on the map. 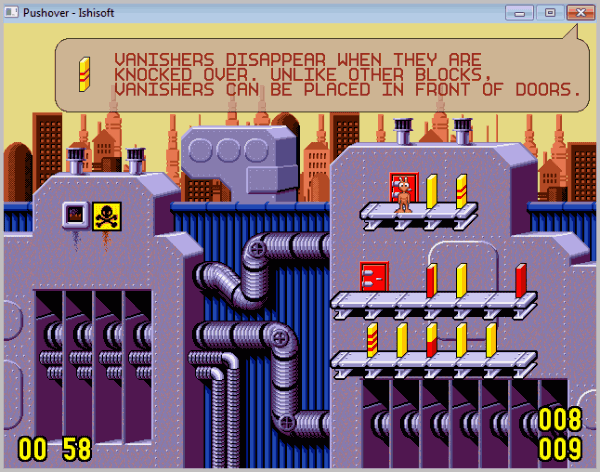 The original game on the Amiga offered 100 levels of game play and it is likely that the remake offers the same amount. The game is automatically saved after each successful level so that players can continue to play where they left of. The game ships with an editor that you can use to create your own levels. The game becomes very challenging at later stages.

I found a long play version of the original Amiga Push-Over game on Youtube, if later levels are identical as well it may help overcome situations where you do not know how to complete a specific level.

Pushover is a great remake of an Amiga classic. The game can be downloaded at the developer website at Ishisoft.

Martin Brinkmann is a journalist from Germany who founded Ghacks Technology News Back in 2005. He is passionate about all things tech and knows the Internet and computers like the back of his hand. You can follow Martin on Facebook or Twitter
View all posts by Martin Brinkmann →
Previous Post: « Bubble Hero 2 [Game Saturday]
Next Post: Play C-64, PC Dos Games Online [Game Saturday] »