The reaction of web developers to Facebook’s introduction of the send button last week has been decidedly mixed. But no matter your view on the subject, it’s worth knowing how and why the button might be useful on your site.

Tapping into the marketing potential of the large and active Facebook user base in any way you can is worth the effort of implementing the “send” button on your site.

The “Send” button allows you to share a link with a select Facebook friend or group of friends instead of plastering whatever you’re sharing on your wall for everyone to see.

Web designers have had mixed reactions to it because it is yet one more plug-in they have to add to the sharing section of their sites. Doesn’t it pretty much duplicate the Email to Friend function? 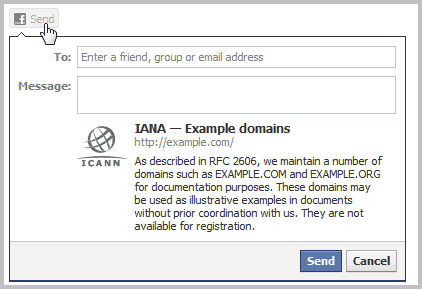 Only on the surface of it. For many Facebook users, it might be easier to enter recipient names instead of email addresses.

It is easier to remember a friend’s name than a long, sometimes random email address. Even better, they are probably already logged into Facebook, which makes the process quick and easy. Facebook is becoming ubiquitous and, especially for younger users, more natural than email. Many users may not take the trouble to send an email, but have no problem entering the names of a few Facebook friends.

But why would a site’s visitor use a “send” button instead of a like button? Maybe there are times when users don’t want to share something over their whole network, but they would like to send it to a few people. For whatever reason, there may be something you don’t want Grandma to see, but would like to share with your best friend. The “Send” button gives you control of who sees what. Who doesn’t like a little more control?

As a web designer, there are a few different ways the “Send” button could help, depending on the type and purpose of your site. If your site is a blog, placing the “Send” button under the first paragraph or two of a posting might get readers hooked just in time to send the story to their interested friends. If you have an eCommerce site, a Facebook user can “send” a particular item to the friends who might be interested in buying. The site’s visitors could do some valuable targeted marketing all on their own.
It might take a little extra work to put a “Send” button on a site. It might even seem a little silly when you look at the sheer number of sharing options you’ve already got. But any way a site’s visitor has to get the word out about a site is valuable, especially one that allows your visitor to market for you directly to the friends who might be interested.

What do you think? Have you sent anything via the “Send” button yet? If you have a website, do you find the extra effort involved in implementing the “Send” button is worth the possibility of targeted traffic?