One of the biggest problem that many beginning learners of Japanese face are the characters and scripts of the language. Learners not only need to memorize the characters, alphabets and words but also how those are drawn on paper.

A standard Latin alphabet for instance has 26 characters, and depending on the language you want to learn a few special characters like Ã¤,Ã¶,Ã¼ and ÃŸ if you learn German. Compare that to the three Japanese scripts Hiragana and Katakana (referred to as Kana) and Kanji. A student of the Japanese needs to learn the 96 characters of Hiragana and Katakana (48 each) plus between 800 and several thousands of Kanji characters depending on teacher and desired language skill.

Students usually start with the Hiragana and Katakana characters before they move on to learn Kanji. With Kanji, it is mostly a matter of memorizing the characters, their meaning and how they are drawn.

The software Kanji Sketch Pad aids Japanese students in their Kanji learning efforts. It is offered as a free version that contains 80 Grade One Kanji and a commercial version with no limitations for $5 (or $10 are for the Cerebware Vocabulary Trainer which comes with the full Kanju Sketch Pad software and offers more than just learning Japanese.)

The program consists of several modes to teach Kanji to the Japanese student. It displays characters and explanations, shows how those characters are drawn, offers free hand drawing and drawing aids to teach how those Kanji are drawn perfectly on screen, tests that test what has already been learned and statistics for progress information.

It usually begins with information about a character and how that character is drawn. The program uses animations to show where where each stroke starts. A left-click on the interface activates the sketch pad to draw the character that was displayed before. It is possible to add visual aids in that mode that show where each stroke begins. 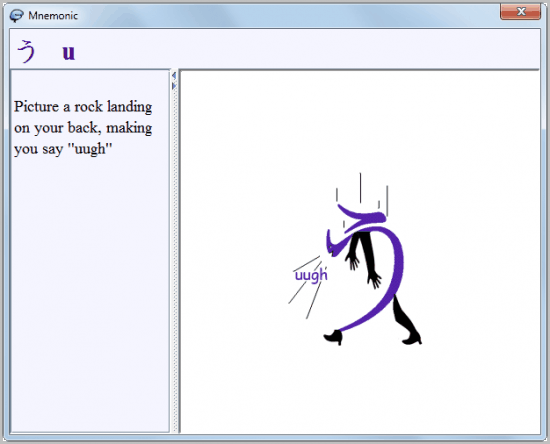 Mnemonics are used to teach character meanings or pronunciations, which can aid the learning if you can get used to the visual and verbal aid. A multiple-choice test to identify a specific character is displayed every now and then. If you get it right you can continue with the lesson, if you get it wrong that character will be the next in your lesson. Kanji Sketch Pad offers several features that make it an interesting program for Japanese students. The biggest setbacks are the missing online help and that it is only available in English and not in other languages (not really a drawback for English natives). A detailed seven part program tutorial is available on the developer website. Users who download the application should read the complete tutorial before they start their first lesson.

The extra $10 for the full program are well invested considering that you would not buy the program if it would not aid you in your learning efforts. I could not find a download link of the software on the developer's website, the download portal Softpedia offers downloads of the latest program version.