The recent photo viewer changes on Facebook have caused quite the controversy among Facebook users. Facebook introduced a new photo view mode about a week ago. Among the complaints is that a right-click on a photo does not reveal options to copy its web address anymore which makes it that much harder to display images individually or save them to the local computer system. 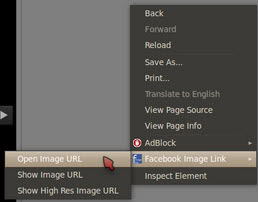 A right-click on a page where the new Facebook image viewer is displaying a photo displays a context menu with the following three options:

Facebook Image Link offers interesting options for Facebook users who like the new photo viewer but miss features to copy photo urls and view photos in tabs. The Google Chrome extension is available for direct installation over at the Google Chrome Extensions gallery.

Facebook users who do not like the new photo viewer at all can take a look at Facebook Photo Theater Killer Gets Rid Of Facebook’s New Photo View Mode to return to the old image viewer on the social networking site.

Update: The extension has been pulled off the Chrome Web Store by its author. An alternative is the Revert FB Photo Viewer extension for the browser.