There has been considerable complaint caused by people in countries where same sex marriages, otherwise known as civil partnerships or civil unions, are allowed.  Now social networking giant Facebook has finally submitted to complaints and added "Civil Union" and "in a Domestic Partnership" to the relationship choices it offers users.

A civil partnership allows same sex couple to have their relationship recognized by the state in the same way as if they were a heterosexual married couple.

It stops short of marriage, which most countries still define as a religious union, but allows for the same tax, inheritance and other right afforded to married couples.

The change has taken place for users in the US, UK, Canada, France and Australia and will no doubt be rolled out to other countries before very long. 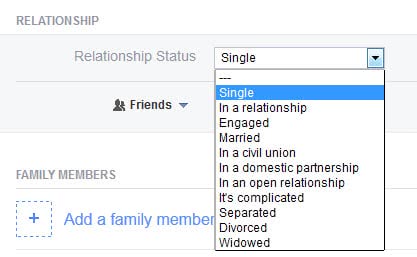 The change, which was first reported by ZD Net, recognizes that over 30 countries recognize civil partnerships, the first being Denmark which introduced legislation in 1989.

Facebook have admitted it has been a "highly requested feature" even though they have rolled the change out silently and without mentioning it on their official blog.

The news will be welcomed by gay and lesbian people who can now finally have their union recognised by the website.

To edit your relationship status on Facebook, click on edit profile in the top left corner of the screen after you have logged in to the site.

There you need to switch to Family and Relationships to find the relationship status dropdown. There are 12 options to choose from currently:

If you don't want anyone to know about your relationship status, select the first option which sets it to none so that the information is not displayed on your profile at all.