7 Taskbar Tweaker was one of the first applications that came out to tweak Windows 7's new taskbar.

I reviewed the application back in November 2009. The developer has continuously improved the software since that first release which becomes immediately clear if you compare the screenshot of the first release with the new version that has just been released.

The portable applications offers several options to modify the behavior of the Windows 7 taskbar.

It works both on 32-bit and 64-bit editions of the Microsoft operating system and displays the following configuration screen on startup. 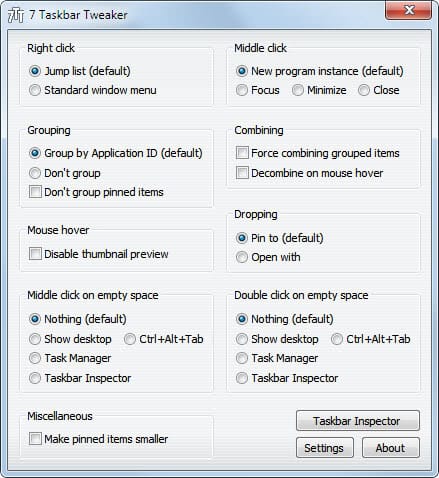 Four options are available to change or add mouse-click behavior. It is for instance possible to modify right-click and middle-click functionality or add middle and double-click actions on empty space on the taskbar. The latter offer the options to show the desktop, emulate Ctrl-Alt-Tab, open the task manager or the taskbar inspector.

Taskbar Inspector? The tool is part of 7 Taskbar Tweaker. It offers several taskbar related options, for instance to reorder items within a tab group, group or ungroup items or run close or minimize commands on multiple windows at once. 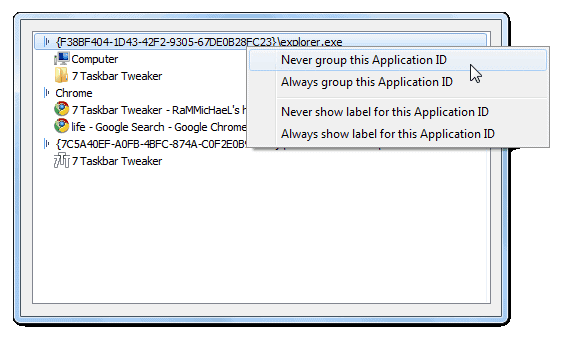 Back to the main app. 7 Taskbar Tweaker has five additional configuration options:

The option to change drag and drop from pinning items to the taskbar to opening them with pinned items is interesting.

7 Taskbar Tweaker is available as a 32-bit and 64-bit download at the developer website. It is only compatible with Windows 7 (and probably Windows Server 2008 R2 as well).

Update: The program has been updated recently. You can now re-group taskbar icons with the right mouse button and without the Taskbar Inspector open at the same time. Windows 7 Taskbar Tweaker is now provided as a setup, which means it is no longer portable.

Update 2: The developer homepage is no longer available. I have uploaded the latest release version of 7 Taskbar Tweaker to the Ghacks server. You can download the program from this link:

Update 3: The developer website is back up. We have removed the software from our server and suggest you head over to the website to download it from the official source instead.

Update 4: The developer website is down again. I have reuploaded 7+ Taskbar Tweaker to our own server. It will remain permanently here. I have also removed the link to the developer site again. You can download the program with a click on this link: