Don't Sleep is a free program for all versions of Microsoft Windows that can block power state changes -- standby, hibernate, shutdown -- on Windows PCs.

The power configuration in Windows determines if and how the operating system initiates a system state change. This can be an automatic shutdown or restart, a switch to standby mode, hibernation or changes that have less of an impact like turning off the computer monitor.

The problem with these settings is that they sometimes kick in even if the computer is not idle. We have talked about the definition of idle in Windows before. Basically, it may be possible that programs are still running when Windows makes the decision to change the system state.

This can be problematic if it is important that the program keeps running, which it obviously cannot if the system goes into standby or hibernation. 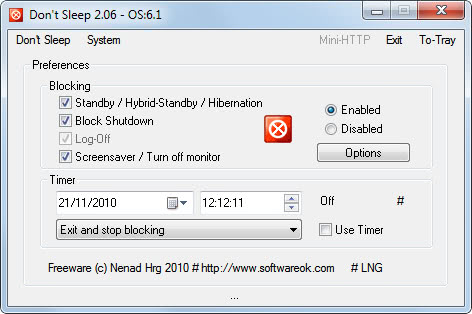 Don't Sleep is a tiny portable application for Windows with which users can block certain system state changes.

The program supports the blocking of the following state changes:

When Don't Sleep is running it will automatically block attempts by the system to switch to any of the blocked system states or modes.

The portable application can be launched directly after download and unpacking. Non-German users need to click on the #Lng button to change the display language to English or French.

Don't Sleep comes with a timer which can be configured to kick off at a specific time. This timer can then exit the Don't Sleep program to remove the blocking, or to shutdown, hibernate or standby the PC.

The options provide settings to define when and how the program starts. The only other available functions are direct links to system tools like the power configuration, user accounts or system configuration.

Don't Sleep can be very handy for users who regularly experience automatic changes of the system state in Windows. This is especially helpful if Windows comes to the conclusion that the PC is idle when in fact it is not.