The New York District Court has ordered LimeWire to shutdown immediately by disabling functionality in the software client that allows users to share copyrighted materials with other peers over the Internet. Users who visit LimeWire's website are greeted with a legal notice detailing that "LimeWire is under a court-ordered injunction to stop distributing and supporting its file-sharing software".

TorrentFreak has the whole story and some interesting figures on the market share of the now-defunct P2P system. The figures are from 2008, but show a massive market share of 37%, followed by uTorrent with 14%. This has likely changed a bit over the course of two years, with torrents become more popular. 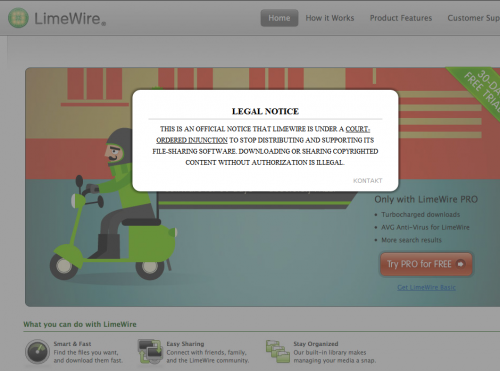 This is an official notice that Limewire is under a court ordered injunction to stop distributing and supporting its file-sharing software. Downloading or sharing copyrighted content without authorization is illegal.

Some users report that the LimeWire client installed on their system now refuses to update. Others report that the client itself is still working as intended and showing results for searches, which makes sense considering that it operates on the Gnutella network which has not been affected by the ruling. And while the P2P software is not available on the developer's homepage, it is still available on third party download portals.

LimeWire users who are looking for an alternative may want to take a look at the Open Source client FrostWire which offers a similar functionality. Check out Alternative.to for more LimeWire replacements.