To Droid Or Not To Droid

Okay folks, the Droid is finally out now. Through all the iPhone-bashing and the creepy ad campaign, it has made its way into our minds and hearts (sort of). At the very least it has forced people to take a look at it and decide what itâ€™s really like.

Overall, the reviewers have liked it and from what I have seen of it, I like it too. But whether that liking will germinate into a purchase is completely up to the individual and I canâ€™t really advise for or against it. To me it is a mixed bag and you have to take your pick.

Here are reasons for choosing it.

You gotta admit it, that 854x440 display looks really great compared to the iPhoneâ€™s puny 480x320 display. And the screen looks positively gorgeous. If I wanted a great smartphone to watch movies on, I would definitely choose this.

Googleâ€™s Got Your Back

When you have a company like Google making applications for you, you know you will have things to like. Googleâ€™s minimalist approach, tight online integration and great web presence makes it the perfect giant to have backing you up in your connected life.

One of the main features of new Android OS is the Navigation feature on Google Maps. People liked it so much that everyone predicted it being the future and the death of all standalone devices and expensive apps. Best of all, the service is free and integrated with Google Maps. It does have some hiccups but I am sure they will be cleaned out soon enough.

iPhoneâ€™s lack of an integrated Instant Messenger app really lets it down and the presence of the very same thing lifts up the Droid. From what I read about the user experience on the Droid regarding this and other Google apps, you folks are going to love â€˜em to death.

And if thereâ€™s one thing that we all love about Google, it is Gmail. It is what I use for my personal account and it is also what I use on my own domain through Google Apps. Gmail on the Android 2.0 is like a perfect little version of the actual Gmail, complete with full labels and threaded emails. If you like Gmail, you will like it on Droid.

Also, the Wave is coming and the Android might have something special for the Surfers.

Not having to put up with AT&Tâ€™s finicky (and frustrating) network and working on the best network in the country will really help you love the Droid. Imagine a (almost) headache free network experienceâ€¦ makes me feel all fuzzy inside.

Some people will choose it simply because it is the first Android 2.0 phone and has the best Android experience so far. Some will also choose Android because of Androidâ€™s (mostly) open source philosophy. But that is not a very practical reason. The multi-tasking however, is a very practical reason and Droid does it quite well thanks to Snapdragon and Android.

And now for the other side of the debate.

If you want agreat multimedia experience, stay on the iPhone. Itâ€™s not like the Android cannot play media but the experience is just not the same. Itâ€™s like the latest Linux and the Mac OS. One does it and the other does it well.

I refuse to believe anyone who claims that they have it better without the worldâ€™s largest mobile app and digital music store. Not to mention movies and the other things that are rumored to be coming. If you have used it, you will miss it on Android and there are no comparable replacements for this. Nothing compares to iTunes. 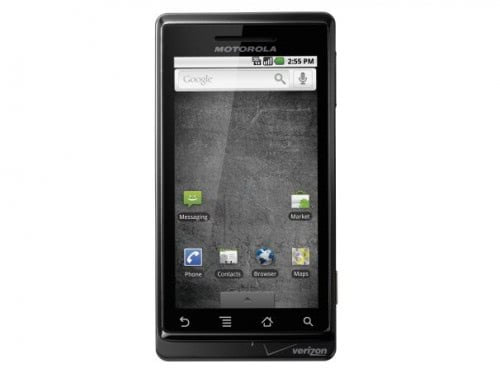 The Android Marketplace over 10,000 apps and there are quite a few apps there which the iTunes Store does not have. But the iTunes has ten times as many apps at over 100,000. Do you still need me to spell it out for you?

Also, since the Droid runs a standard Android install, it does not do much out of the box You will have to download various apps for doing things like viewing PDFs and different mail attachments, etc. Sure the apps are free but you have to find them and install them. With the iPhone, you can hit the ground running.

Other customized Android phones come with these apps pre-installed though.

You cannot lock the screen with a pass code. There is also no support for a remote wipe. You can get that through another app but nothing as integrated as the Find My iPhone Feature. Plus, you can install apps from sources outside the Marketplace.

Thatâ€™s a good thing right? Yes but you will also be vulnerable to malicious apps that can cause some serious damage. You will receive a warning if you try to install from outside the Marketplace but it can be done.

One of the few complaints with the physical parts of the phone is the keyboard. Reviewers and users have been reporting having a tough time with the keyboard. As for the virtual keyboard, it is all good except for the fact that thereâ€™s no multitouch. Multitouch has been intentionally disabled on the Droid as per agreements between Motorola, Google and Verizon.

So there you have it, the most popular pros and cons laid out for you. Choose for yourself and choose wisely.

ADVERTISEMENT
Summary
Article Name
To Droid Or Not To Droid
Description
Okay folks, the Droid is finally out now. Through all the iPhone-bashing and the creepy ad campaign, it has made its way into our minds and hearts (sort of).
Author
Shailpik
Publisher
Ghacks Technology News
Logo
Advertisement

Previous Post: « Spring Design's Alex And B&N's Nook
Next Post: « The HTC Dragon Exists And Google Has It!