Cache My Work is a free program for Microsoft Windows devices that will load programs automatically after you reboot the PC.

A popular feature in modern web browsers is session management. Web browsers can be configured to load the very same websites that were open the last time you used the browser. This allows you to continue where you left off the last time without losing any information in the process.

A similar option for the Windows operating system is not available by default. That is where the Cache My Work software programs steps in. 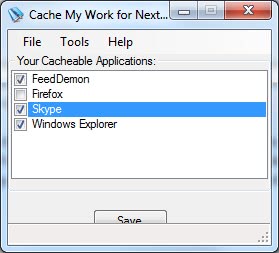 The program makes use of the run once key in the Windows Registry to launch these applications again. What this means is that while the programs will be launched, any work that has not been saved won't be loaded on start as the program does not take care of that.

This means that it is possible to launch a web browser like Firefox with the tabs open that have been open during the last session. Applications like Notepad, Adobe Photoshop or Word on the other hand will be launched with blank screens instead.

Cache My Work can also remember the open Windows Explorer windows to recreate them on the next start of the operating system.

The program is intuitive to use and should not pose any problems even to inexperienced users. Interested users can download the program from its Codeplex profile page.

Update: The program has not been updated since 2009. You will notice that it won't run on newer versions of Windows anymore (tested on a 64-bit version of Windows 10 Pro).

You can replicate the functionality manually, but it requires more work on your part if you switch between different programs regularly that you want to be re-opened on start.

The easiest option is to load Shell:startup in File Explorer, and drop any program that you want to be available at all times there (simply drag and drop it there).