Microsoft and Reverbnation are currently running a promotion that is offering 1000 songs for free download. The songs are available in mp3 and m4a format and can be downloaded directly from one of the websites the promotion is running on. This includes the Windows Myspace page and a special Windows directory at Reverbnation.

You find a good mixture of established artists in the list including songs by Bif Naked, Underoath or Warren G but the majority of songs comes from artists that most visitors probably never heard of. This does not necessarily mean that this is bad music. It is actually a good way of discovering new artists that are not that in the focus of mass media.

The downloaded songs have been encoded with 192 Kbit and it is likely that all songs are encoded in this bitrate. Music can be sorted by letter or genre which helps to find the right music genre or artist. 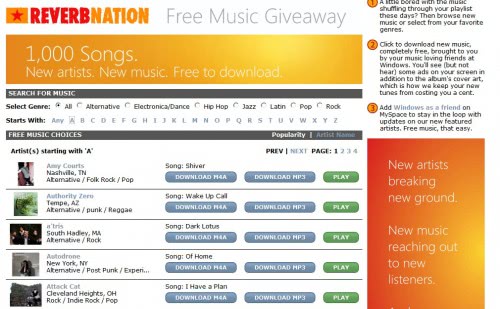 There is no word yet on the duration of this promotion. Thanks goes to jagslive for sending us the tip.

Update: Please note that the promotion has ended. The page does not list the mp3 music files anymore that have been offered on it previously as part of the promotion between Microsoft and ReverbNation.We have removed the links pointing to the sites as a consequence as it does not make sense to keep them up.

If you are looking for free music I suggest you take a look at Jamendo, which is offering thousands of free music albums for download on its website.