You sometimes encounter websites or text on the Internet, in emails or in documents on your computer desktop that are written in a language that you either do not understand completely or have only a limited knowledge of. Automatic translation services are one of the most comfortable and fastest ways of translating these information into an understandable language. The trade-off is that the quality of the translations does not come close to that of a manual translation by a language translator. It is however usually enough to understand the text at hand.

The Google Translate software client is a software program for the Windows operating system that can automatically translate text that is marked by the user. It is not limited to the web browser or any other application. It will automatically recognize selected text and provide a translation for that text in its interface. 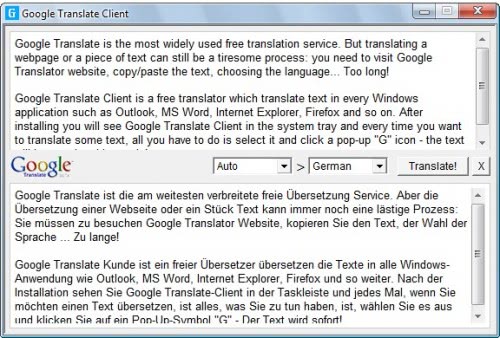 The user is asked to select a main language during setup which will be the language that the other languages get translated to. The translation tool will display the original text in the upper part of its window and the translated text in the lower parts. It is possible to switch the source and target languages manually if needed.

The google Translate software client can also be used by dragging and dropping text into its interface which will also be translated immediately if the automatic recognition is enabled. A handful of options are available that allow the user to change the design of the application and the way the text gets translated.

The software program was tested with various applications including the Mozilla Firefox and Internet Explorer web browser, the email client Thunderbird, text documents and Microsoft Office Word. It worked with all of the applications and it is likely that it supports additional programs as well.