The project is still in an early stage and comes with a command line version for the Microsoft Windows, Linux and Apple Macintosh operating system. This might turn away users who do not like working with the command line. The interactive mode that has been added the network discovery software on the other hand might convince them to give it a try nevertheless.

Fing needs to be installed before it can be used. It is compatible with all recent versions of Microsoft Windows starting with Windows XP. Note that it will install WinPCAP if not installed on the system.

Fing can be run with a single command from the command line, or started in interactive mode.  Please note that you need to run it with elevated rights on newer versions of Windows, as it won't detect any network adapters otherwise due to missing rights.

The interactive mode consists of a series of questions and simple answers provided by you. The first question for example after starting the interactive mode is about the mode the software should run in: options are discovery, scan or information 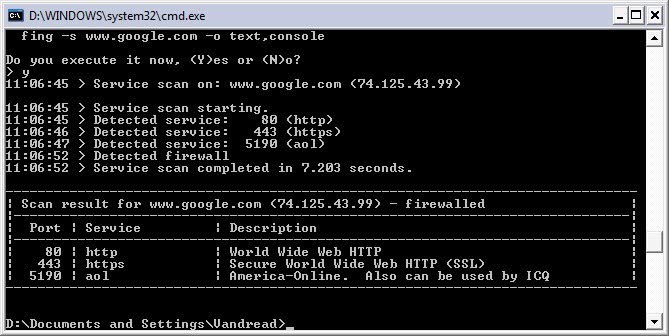 Fing offers a selection of output formats such as text, html or csv that can either be displayed directly in the console or saved in a file on the local computer system.

Fing is a fast network discovery tool for command line ninjas. The export functionality and speed are excellent, a graphical user interface would be desirable nevertheless.

Update: Fing and the developer website are no longer available. We have uploaded the latest working version of the application to our own server. Please note that we have done so for archiving purposes only, and don't support the program in any form. You can download Fing with a click on the following link: Fing

Fing ships without help file or documentation. Here are a few pointers:

Martin Brinkmann is a journalist from Germany who founded Ghacks Technology News Back in 2005. He is passionate about all things tech and knows the Internet and computers like the back of his hand. You can follow Martin on Facebook or Twitter
View all posts by Martin Brinkmann →
Previous Post: « Computer Power Management Software Edison
Next Post: Rip, Mount, or Burn Blu-Ray DVDs »