While some media players support displaying cover art when they are used, others don't support this at all.

The main feature of CD Art Display is that it displays music album covers independently of the programs that you use to play music on your Windows PC. This works only however for supported media players; those are, at the time of writing, iTunes, Winamp, Windows Media Player, Helium, foobar 2000 and Album Player. Some media players, such as MediaMonkey are partially supported.

The program displays the cover of the currently playing song in its interface automatically when it runs, and when audio is played in one of the supported media players.

Next to the cover is information on the title, artist, album, playing time and basic controls to start, stop and skip songs. Several player specific options are available in the menu including rating songs or adding them to playlists.

The program will use the covers that are provided by the music player or folder the audio files are stored in. It has options to search for album covers which is helpful if no cover art is available for the selected song or album. The covers can then be easily added to the album. 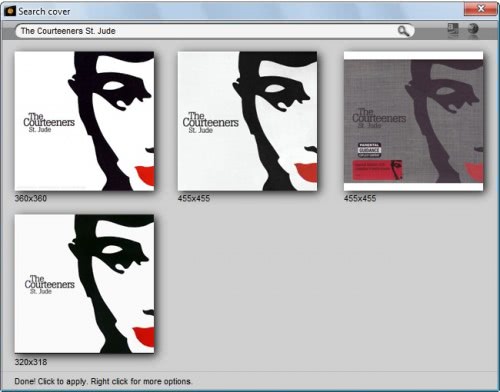 The window can be set to be always on top, locked or pinned to the desktop. CD Art Display is highly configurable and comes with its own skin repository at the official website.

The options are extensive. Users who hide the taskbar will be glad that the balloon tips that appear in the system tray can be disabled. It is also possible to add additional cover directories or make the program download covers automatically from sources like Amazon.

CD Art Display shines when it comes to displaying cover art of playing songs on the desktop.If you like that, and use one of the supported media players, you may find the program suitable for that task.

Update: The latest version of CD Art Display has been released in 2013. The program is still compatible with recent versions of the Windows operating system. It is however likely that it will stop working at one point in time.

The latest versions of the program have received feature additions like an Amazon Cover Art downloader. It is likely that at least some of the features that depend on external services are no longer working properly though because of the