It's rather strange that Windows does not ship with an easy way to configure or change keyboard shortcuts that the system makes available.

Enter HoeKey, a lightweight portable software that can be used to configure various advanced keyboard shortcuts. The application ships with a set of pre-configured hotkeys that you can use right away, and options to add more hotkeys.

Keyboard shortcuts can be edited and added to the computer system by editing an ini file that lists all the existing shortcuts. It basically comes down to the following. You select a keyboard combination containing at least one of the modifier key Windows, ALT, Shift or CTRL key, and one additional key and define an action for that keyboard shortcut afterwards.

One of the biggest strengths of the application is the wide variety of possible actions that can be defined. It ranges from running applications, entering text, manipulating windows, changing system settings like the volume of the system. Hoekey supports multimedia keyboard keys and can control media playback on the computer system as well. 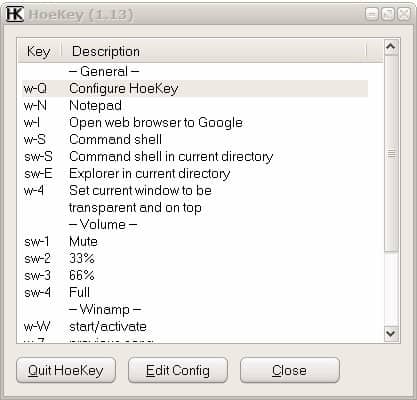 As far as functions are concerned, the following are available:

Probably the most amazing factor of this keyboard shortcuts program is its low resource usage. Once everything has been configured the application runs quietly in the background. It uses 200 Kilobytes of computer memory while running and 600 Kilobytes of virtual memory. That's nothing compared to most other applications that allow the manipulation of keyboard shortcuts on the Windows operating system.