The Autorun feature is a big security risk on the Windows operating system. It is a risk even if you are the only person accessing the computer. Remember the Sony rootkit incident a while ago? Guess how Sony managed to install the rootkit on the computer system? Autorun can be disabled in Windows and this is probably the way to go for most users.

There is however another solution in the form of the USB security software USB Cop which has been uploaded to Sourceforge yesterday. USB Cop blocks all attempts to run an autorun.inf file on the computer system. It will instead display the contents of the file to the user giving a recommendation what the user should do with it.

Available options are to browse the contents of the disk or to close the dialog without performing an action. The interface itself will display all entries that are located in the autorun.inf file. 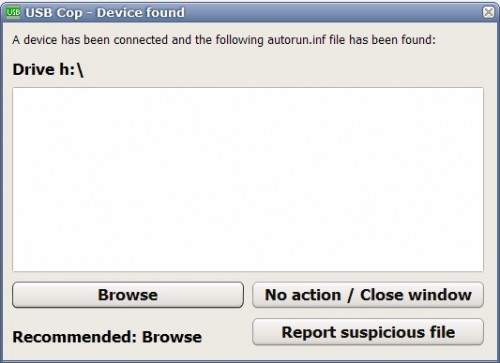 The option to execute the autorun.inf file is normally missing from the available options. What this application currently does is block all attempts of running an autorun.inf file on the computer system. The only difference between disabling that option in Windows and using the software is the ability to browse and see the contents of the autorun.inf file a bit faster and automatic with the software. In reality it would simply mean a few additional clicks for the same result without running a software in the background all the time.

The software itself uses about 4.5 Megabytes of computer memory while running.

Update: Development has continued in recent years, the latest version of the program, dubbed USB Cop 1.0 Alpha 1, has been uploaded to the Sourceforge servers in March 2011. It is definitely an alternative for inexperienced users who want recommendations what they should do when they insert a disc or stick with autorun information.