WOW Addons extend the functionality of the game by displaying new information, functions or visuals. One problem that World of Warcraft players run into regularly is that addons will stop working after game updates.

The options for non working WOW addons are to disable them for the time being or to search for an update on the Internet. This has become a lot easier with the World of Warcraft Updating System. 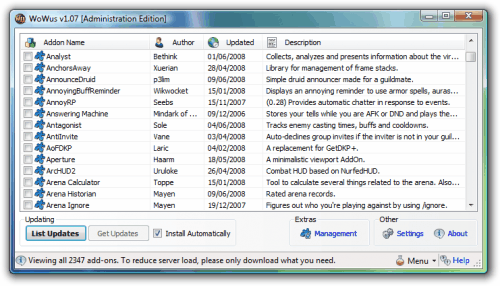 The WOW Addons updater will automatically scan the World of Warcraft installation. The software will then query a database and check the version of each installed addon with the version on the server. It will furthermore download and install all newer addons automatically.

The software can also be used to backup and restore WOW addons easily.

Update: WoWus has been discontinued. When you visit the author's web page you will notice the following message on it:

The WoWus application has been discontinued due to reasons outside of my control.

It is not clear what is meant by that, but it is likely that the author is referring to changes that Blizzard made to the World of Warcraft game client or the site the database was hosted on. Downloads are no longer available due to incompatibilities with recent versions of World of Warcraft.

To keep up to date when it comes to add-ons, visit the Curse gaming site which lists more than 5000 different add-ons for WOW. While that requires manual checking on your part, it is the only option right now to make sure your add-ons are all up to date.