It is relatively easy to erase pictures on a digital camera. Hitting the wrong button could delete all pictures at once with no apparent way of recovering the pictures. Digital cameras usually do not provide the means to recover deleted pictures. The only viable option would be to use photo recovery software like Free Art Plus Digital Photo Recovery to recovery erased photos on the digital cameras.

The photo recovery software is compatible with every Windows operating system since Windows 95 and should work with all memory card types. Two of its biggest selling points are the ability to recover pictures from formatted memory cards and that it can even identify and work with cards that Windows detects as corrupted.

The portable software provides two recovery options. The first is to recovery images directly from the memory card while the second will create an image of the memory card on the computer which can be parsed for photos afterwards. 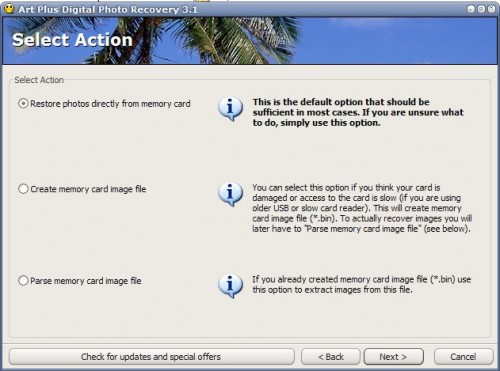 Memory cards can be accessed directly if they are visible as a logical drive in Windows. If that is not the case a memory card reader has to be used instead. The last step involves picking the image formats supported by the camera. Some users might be tempted to select all but this could lead to corrupted photos and is not advised. The easiest way is to look at previously saved images or the digital camera's manual to find out the formats that it saves the photos in.