Watch TV On Computer With RevoluTV

A few ways of watching tv on a computer are available these days. There are movie streaming websites like Hulu that provide access to tv shows of certain TV networks to users from specific countries. Many TV stations offer streams of their contents on the Internet as well That's the basic concept of RevoluTV which provides a central interface for free TV stations that stream their shows.

It is more a convenience than something revolutionary because programs and websites that do the same already exist for some time. The biggest advantage of RevoluTV is the no frills no thrills interface that is clean and easily accessible. It makes use of Windows Media Player to stream the TV contents to the computer screen which unfortunately means that the software program will only run on computers with Windows XP or Windows Vista.

Channels are divided into themes like News, Games or Kids which list the available TV streams. A click on a network name will load the channel immediately which works well and without lags. It usually takes a few seconds to buffer the stream before a picture is shown.

Playback quality depends a lot on the user's Internet connection but also on the type of backbone the TV network is using to stream their contents. 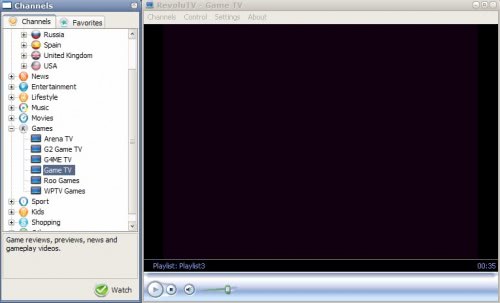 Channels can be added to favorites for faster access. There is however no settings menu of any kind. Basic controls for volume and playback are offered but nothing beyond that. The only way to change settings would probably be to change them in Windows Media Player.

Update: The program is still available but it appears as if it has not been updated for a while. I suggest you check out a couple of alternatives such as our TV watching guide or the Zattoo program if you are living in the UK, Germany or Switzerland.