StaxRip is an Open Source video encoding software that can turn videos into mpeg-4 format using codecs like x264, XviD and DivX. It can for instance be used to turn a video DVD into a much smaller sized video with barely any quality losses that can easily be stored on the computer. One interesting way is to use it to rip a TV series season to the computer creating those handy 350 Megabyte videos per episode. That way a complete season takes between 4-8 Gigabytes of hard drive storage compared to the up to 17 Gigabytes that it would demand if stored in DVD format.

One of the nicest features of StaxRip is the fact that it can download needed codecs and utilities from within the program interface. If you dealt with Open Source video encoders before you might have experienced that you needed to download and install the needed extras manually before the tool could be used.

StaxRip makes use of templates to speed up configuring the various settings and can convert or merge single or multiple files in one go. A video file that is loaded as a source will automatically be analyzed by the video encoding software and important values such as framerate, length or size will be shown in the interface. The same variables are shown in the destination pane where they will be automatically updated when the user changes a setting. 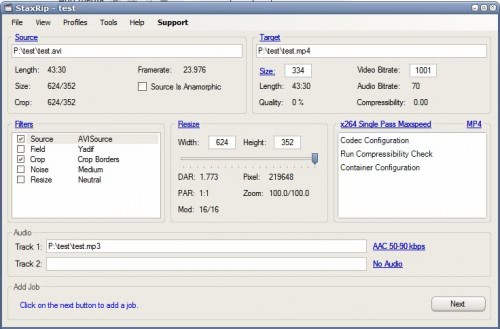 Videos can be resized to reduce the size of the destination video which is extremely useful when encoding videos for mobile devices like the Sony PSP, a mobile phone or an iPod that can play videos.

The output audio and video codecs have to be chosen. Multiple encoding profiles are available that range from fast to high quality encodings. The codecs can be configured furthermore for optimal results.

Video encoding speed depends on the configuration and the speed of the computer hardware.