If you look around and ask your friends which media player they prefer you will most likely come up with many different answers. Winamp, Windows Media Player and iTunes will surely be on the top of the list with lesser known players mentioned by some of the friends. Most are perfectly happy that they can play music on their computer without having to think about configuring the service first or tweaking it for maximum effectiveness.

AIMP is a music player that might not be mentioned that often. The main reason why that is the case is surely the Russian website that is keeping lots of users at bay. Some might spot the player on download portals like Softpedia and those are usually the ones who stick with it after installing and testing the player.

AIMP comes with an impressive design and functionality that leaves most music players behind. It is low on resource usage, provides an impressive sound, great design, an audio converter, CD ripper and Internet radio ripper among other things.

The official website contains a few plugins and skins that can be added to the player but one feature that the player excels in is the compatibility to many Winamp plugins. 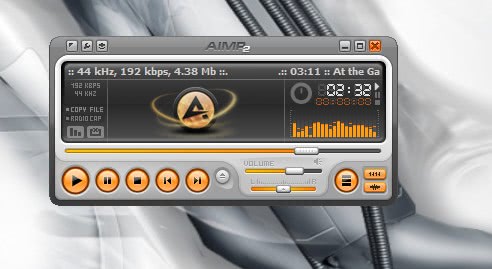 One of the winners of a Ghacks t-shirt mentioned a few Winamp plugins that were keeping him from changing to AIMP. A quick research revealed that it was possible to add the plugins to AIMP as well. He mentioned the following three plugins: Minilyrics, DFX and Ozone.

The principle is basically the same for all plugins:

A rule of thumb. If in doubt copy all files into the directory. AIMP will tell you if something is missing upon activation of the plugin. This is how you do that:

A click on the top left icon will display a menu. Choosing plugins from that menu will open the AIMP Plugin Manager which displays all loaded (meaning active) and unloaded plugins.

New plugins that have been placed in the plugins folder can be activated by selecting them with a left click and clicking on Load afterwards. You will see a message window if something is not right. If the wrong dll has been moved into the plugin directory no plugin will be shown under the Unloaded Plugins tab.

Some plugins, like the DSP ones, require activating in the options of AIMP. A click on the same icon that brought you into the Plugin Manager will also bring you in the DSP Manager. There you can select the Winamp DSP Plugin that has been previously loaded into AIMP.

Not all plugins will work but many will. It is just a matter of trying.