Joost was previously only accessible by using a video player that had to be downloaded. That seemed to fail to bring in the desired user numbers and Joost decided to drop the software client and create a web based Flash portal with all their contents. The transition phase which ended yesterday required users to install a plugin to view shows but as of now everyone with an up to date Flash plugin can watch the shows at the Joost website.

One of the initial advantages of Joost was the software client. Yes, it had its problems but it provided interesting features that are hard to impossible to realize in a web client. For one, switching between channels and shows was more or less instant, the web client delays requests because that is how the web works.

Users do need an account before they can watch any show on the website which is one of the big drawbacks of the system. The other drawback is the lack of mainstream media. Yes, you find some tv shows that are free to watch for users from authorized countries but there is not a lot mainstream wise that you cannot watch somewhere else on the Internet. 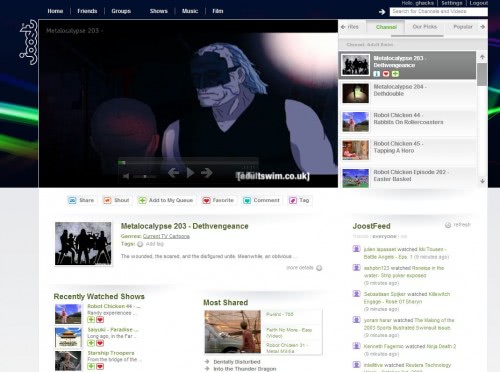 What Joost needs more than anything else is killer content. Not necessarily tv series like 24 or Alias. It could be something more geeky exotic like a huge Anime archive or Independent movies. There should also be room for educational content.

Update: Joost is gone, more or less. You receive a "pause" notification on the site stating that the company is re-evaluating its service. The message has been up for quite some time now and it is not really clear if the project has been abandoned completely or if it will be relaunched in the future.