NVIDIA video card owners should definitely take a look at the NVIDIA System Tools suite which can be downloaded from NVIDIA. It is a set of system tools that have to be installed next to the video card drivers. The suite consists of three different tools which are installed separately during installation: NVIDIA Performance Group, NVIDIA System Monitor and NVIDIA System Update. There is unfortunately no way to pick the tools to install, all three will be installed together on the system.

The interesting question for NVIDIA video card owners is obviously about the new features that those system tools offer after installation. It does add two new entries to the NVIDIA Control Panel that can be used to tweak various graphic card settings. The NVIDIA System Tools add a Performance and Update entry to the Control Panel.

The Updates entry can be used to check for video card driver updates and schedule these checks to be performed regularly. The Performance tab adds an option to create usage profiles that use specific clock and fan speeds and voltages. Those profiles can then be loaded automatically by defining rules in the Profile Policies menu.

A user could for instance create the rule to load the profile high-speed which is using an overclocked video card and full fan speeds whenever the game Crysis is loaded on the system. 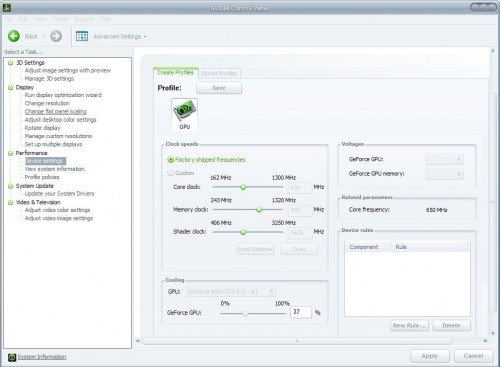 Besides switching profiles three other actions can be specified when certain conditions are reached: Signal a warning tone, pop-up a warning message and to launch an application. Conditions include temperature reaching certain levels, loading of applications or when a certain time is reached.

The NVIDIA System Monitor is the last tool of the NVIDIA System Tools suite. It brings up a few widgets on the screen that display cpu and memory usage of the system by default but can also include information about the video card and bios.

The downside of the NVIDIA System Tools suite is that it uses lots of computer memory and is therefor only advisable to be used on systems with enough computer memory.