Paragon Drive Backup Express is a free drive backup software for 32-bit and 64-bit editions of Microsoft Windows XP and Windows Vista. Well, almost free because a registration is required to receive the product key for the drive backup software. The Drive Backup Express edition has a reduced functionality compared to the commercial Drive Backup Personal Edition, it is however providing all means to backup drives and restore them to (different or the same) partitions.

So what is the Drive Backup Express offering in detail? It obviously allows the user to backup to hard drive or partition if it is currently accessible in Windows XP or Windows Vista. The Drive Backup version only supports backing the data up on other drives that are connected to the computer, but that should be enough for most users anyway.

The archive that is created during backup is compressed, it used roughly 17 Gigabytes to backup my 50-something Gigabyte hard drive. On the other hand that drive had a lot of free space, only 19.2 Gigabyte were filled with data. 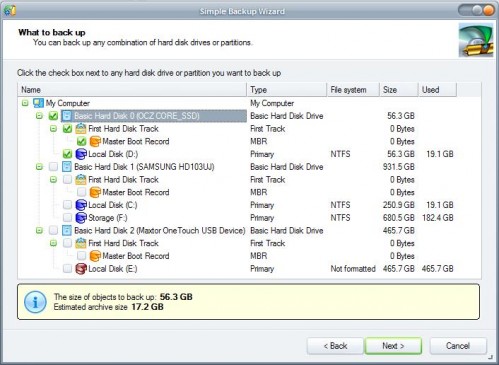 The images that get backed up by Drive Backup Express can be restored which means it's possible to backup partitions or complete drives. Resizing is supported as well.

Update: Paragon Drive Backup Express has been renamed to Backup & Recovery 2012 Free, supporting all recent and not so recent 32-bit and 64-bit editions of the Microsoft Windows operating system. You can use the new version to backup files to disk, or optical media. The backup software can backup a full hard disk, and supports differential backups as well.