I bought my shiny green limited edition Xbox when it came out, put a modchip inside and replaced the hard drive with a 120 Gigabyte drive. The first application that I put onto it was XBMC, the Xbox Media Center, which functions as my main entertainment hub ever since. I usually drop movies on it once every while and replace old ones because the hard drive has limited space but it gives me the pleasure of viewing movies that I download or rip on my LCD television and not my computer. I never really liked watching movies on the computer either.

That Xbox Media Center is apparently going cross plattform and a early alpha release is available for Windows, Macintosh and Linux. The funny thing is that you can download all three releases but not the Xbox release from the website because of legal reasons. I still think that Microsoft should hire those guys and make the XBMC the default media application of the Xbox.

It is clearly aimed at media PCs that are used in the living room but it can also be started from any computer that runs a supported operating system. Users who know XBMC from their Xbox will feel familiar with the interface because it looks pretty much alike, only that the gamepad navigation was replaced with mouse navigation. 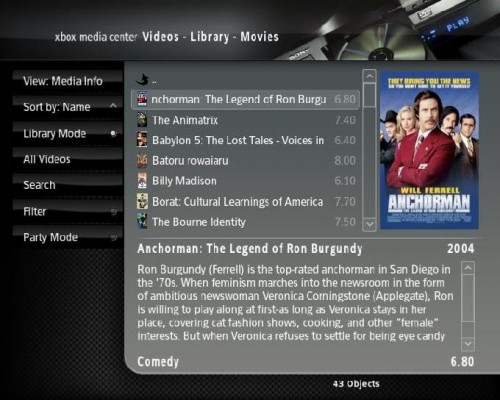 XBMC is fully skinable, supports plugins that can be downloaded from XBMCScripts like tv guides, games, communication plugins and media plugins. It does come with two scripts, a Tetris game and Apple Trailers which provides access to the vast Apple movie trailers archive which means you can access nearly 1750 movie trailers from within the interface.

The media player plays pretty much everything that you throw at it and supports audio formats and pictures as well. It's a great application, probably the best media center software ever released.